Gribben 3.The Future of the Church 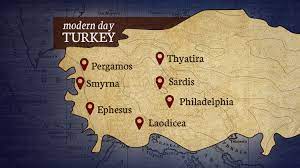 The locations of the Seven Churches

Gribben 3.The Future of the Church

After this interesting and entertaining tour of the changes of one congregation of Christ in its search for a Christian culture, it may be wise to steady ourselves with a general view of  the church . So, this last time, we examine  ‘ the church and its Re-construction,  The Future of the Church’

In reading Gribben’s book, we have seen congregations of the Reformed sort, advocating different contexts of culture as they look into the future. This is how Gribben puts it in the  closing pages of his book, when he ruminates on the prospects of Christian Reconstructionism. He notes the remnants of this, now in the prospect of a general eschewing of physical violence in their politics. Rushdoony, who died in 2001, rejected violence, and Wilson has continued to grow his church in Moscow, Idaho, and to stimulate various kinds of publications, but with no sign of rejecting the elections and political policies of Washington, even when they at far as can be in the boundaries of the USA.   What were taken to be signs of the Second Coming have largely disappeared. There are no doctrines of new–minted ideologies expounded from the pulpit as there is (one hopes) exposition of the central doctrines of the Westminster Confession, and those who expound its sister Confessions.

According the NT, the future of the church is set out in the gospel  of Matthew in ch.16 15-20. In Mark’s gospel there are three similar occasions, in 8.27, 9.30, and 10.22. in 8.27 Christ asked his disciples, Who do people say that I am’. Some thought he was John the Baptist, and others Elijah, and one of the prophets When he asked, But who do you sat that you I., Peter answered  ‘You are the Christ’, and he strictly charged them to tell no one about him’ On the second occasion, 9.30,  takes up his concern to keep this secret to the disciples, because he was teaching his disciples privately, ‘The Son of Man is going to be delivered into the hands of men. And when he is killed, after three days he will rise’. And the text adds ‘But they did not understand  the saying and were afraid to ask him’.  The third occasion was recorded in 10.32. ‘And they were amazed , and those who followed him were afraid. And taking the twelve  again, he began to tell them , saying, ‘See, we are going up to Jerusalem, and the Son will be delivered over to the chief priests and the scribes, and they will condemn him to death and deliver him over to the Gentiles. And they will mock him, and flog him and kill him. And after three days he will rise.’(10.34) The three were more detailed than the earlier. Not silence as at first, but privacy, his arrest and killed and his rising again, and finally in his destiny the Gentiles were involved, being handed over to them, to Pilate, followed by a resurrection after ‘three days’.

In Matthew there are also of three occasions, when Jesus told of his crucifixion, Matt 16.13, 17.2, and  20.17. Of these the first is the most detailed. Again it is Peter who confesses Christ, the Son of the living God. ‘And Jesus answered him, Blessed are you, Simon Bar-Jonah! For flesh and blood has not  revealed this to you. And I tell you, you are Peter and on this rock I will build my church, and the gates of Hell shall not prevail against it, and the gates of hell  shall not prevail against it. I will give you the keys of the kingdom of heaven, and whatever  you bind on earth shall be bound in heaven, and whatever you loose on earth shall be loosed in heaven. Then he strictly  charged the disciples to tell no one that he was the Christ. (17-20).

There are those in the Christian church that identify Peter with the Papal authority, thus undermining Protestantism.  But surprisingly, Calvin says on the phrase ‘And on this rock’ (11.18), ‘whence it is evident how the name Peter comes to be applied  both to Simon individually, and to other believers. It is because  they are founded on the faith of Christ, and joined together, by a holy consent, into a spiritual building, that God may dwell  in the midst of the people of Israel for ever. (Ezek, 43.7). So Peter designates any believer, and especially the apostles, building ‘a new church, which would prove victorious against all the machinations of hell’. (Harmony of Matthew, Mark, Luke, volume I, 291, part of Calvin’s treatment to p.307). Not Peter an individual but a representative of all those who were enlightened, as a fruit of the Holy Spirit’s work  released through Christ’s’ crucifixion and resurrection. The focus is on the person of Christ and the faith in him.

This is focused narrowly, but expansively, on the Saviour and his early church. Of this Paul refers to the  ‘household of the  apostles and prophets, Christ Jesus himself being the cornerstone, in whom the whole structure, being joined together grows unto a holy temple in the Lord’. (Eph. 2.20-2)

Culture in the Church

This brief survey has been necessary in order to see that there is little if any importance given to the ‘culture’ of the church’ setting, or the ‘context’ in which the church  exists. The churches can err, becoming tarnished by its context.

3. Pergamum, where Satan dwells, the teaching of the Nicolaitans

These judgments, if that is the correct word to use, insofar as they are exact, have to do with faithlessness or its opposite, but there is no reference to the political or social cultures through which the church was travelling , or how besides the Reformed churches, and of their relations to, say, the countless numbers of Christian Pentecostalists, fare in cultural matters. And by what political manoeuvres that ‘the kingdom of the world has become the kingdom of our Lord and of his Christ, and he shall reign for ever and ever’. (Rev. 11.15) This seems to announce the end of politics.

Every one who has post-millenial opinions has a view of the years of Gospel plenty to come and  the culmination in the visible coming again of Jesus. This description has a number of variants, as to speed and timing, and place and of the nature of Christ’s personal presence, giving plenty of scope for discussion and the presence of a good deal of uncertainty.

Gribben’s interesting book ends by certain congregations of Reformed churches waiting patiently for more favourable cultural conditions coming to pass in the United States for the project of Christian reconstruction to be visited again, as it was in its early days. For example, Crawford Gribben says that of Moscow Idaho, ‘The  Moscow community has survived, and has successfully resisted American and it greatest success may be found in its members creative work.'(143) Authoring books is certainly a cultural endeavour, but though necessary is it sufficient for Christian Reconstruction? Gribben’s comment is ‘But, as the New Saint Andrew’s students know only too well, a plot can only be identified as comedy when it provides a happy ending. Will there be a happy ending ? Will the ‘wildly postmillennial’ expectations of the New Saint Andrews students be realized? And would that be a happy ending for anybody else?’ (143).