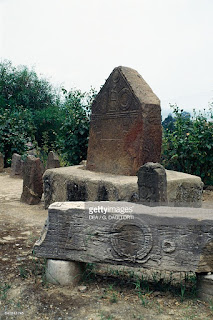 
The City of God was completed three years before Augustine died. The Barbarians overcame this Roman province of Africa later in the century. They reached Hippo in 430, the year of Augustine’s death. Christianity was wiped out. In this case at least Tertullian’s saying that the blood of martyrs is the seed of the church was inapplicable. The retrenchment of Rome from its outer provinces, the division of the empire into two halves centred on Rome and Constantinople, accentuated the importance of Rome in the West, and this was underlined by the Crusades, leading to the Holy Roman Empire of which you and I are heirs. The rest is history.

The book, long in Augustine’s mind, was begun in 413, with various pauses, - Books IV-V  in 415, Book XI by 417, Books XV - XVI by 425, Book XVIII in 425, with the work finished in 427, fourteen years after it was begun. It is a massive, meandering work, full of learning and argument, but rather higgledy-piggledy on first inspection. Augustine planned it, from the very beginning to answer the pagan Roman charge that the disaster of 410 had come about as a result of the Romans’ foolish adherence to Christianity, and their rejection of the old Roman religion.

The book is about the nature of Rome, its destiny as a city, and the contrast with the city of God. It is of interest to us as providing indicators of Augustine’s mature thinking of the Roman empire, and of its place in the history of salvation.

Augustine identifies the city of God with the Christian church,  the kingdom of God. Not the ‘mixed’ empirical church, but the church of the elect on earth at any one time. It is to such people that Augustine is addressing his sermons.  The City of God is composed of Christians, and the dead departed, and the yet to be born. They have a king, Jesus. Sociologically in this present era this kingdom it is seated within the terrestrial city, Babylon.  It does not have one discrete social identity, but worships as social groups,  as churches scattered throughout Babylon, the country of Israel’s exile, as referred to by Peter in his first letter. (I Pet. 5.13)

So the people of God are physically within Babylon, and are also inhabitants of Babylon. There is friction between the two. The horizon of Babylon is this life, that of the members of the city of God, God’s eternity, and the coming of the seventh age. Babylon is governed by cupiditas, selfishness, the city of God by caritas, love of God and neighbour, the life of which will culminate in the age of glory, Jerusalem the golden.  Unappreciated by the citizens of Babylon, the citizens of the City of God also are destined to live again after their deaths and, and those who have never been other than citizens of Babylon are to be punished eternally. To  our taste, at least as this is judged by what we talk about,  there is a disproportionate emphasis on this side of things in the book. Augustine never ceases to extol the state of glory.

So the word ‘city’ in ‘City of God’ operates differently from ‘city’ in the city of ‘Babylon’. We must put from our minds the idea that between the two there is any political concordat or covenant, or could be, but also that between them there are any physical barriers. The people of God are in Babylon in the sense that they live and work alongside Babyloners. Unlike the later Anabaptists, they are to actively promote their inevitable participation in it.

Augustine has an interesting chapter in the City of God on neighbourliness in Babylon headed ‘Of living sociably with our neighbours: how fit it is, and yet how subject to crosses’. (City of God, 19.5)

He also has things to say about the emotional state of pilgrims.

[A]ccording to our religion and the scriptures, the citizens of God, as long as they are pilgrims, and in the way of God, do fear, desire, rejoice and sorrow. But their love, being right, straighten all these emotions. They fear eternal pain, and desire eternal joy. They sorrow for the present, because they sigh in themselves, waiting for their adoption, even the redemption of their bodies. They rejoice in hope, because that shall be fulfilled which is written. They fear to offend, and desire to persevere. They sorrow for sin and rejoice in doing good….And as they are strong or weak, so do they desire or fear to be tempted: rejoicing or sorrowing in temptation. (City of God, 14.9)

The days of state and church and their relations was not yet. Constantine did not bring in a positive church-state relationship as part of the constitution of the Roman Empire. The Holy Roman Empire and its dissolution into various national concordats between church and state, and the life of those churches that dissented from any such relationship, was still to come. In Augustine’s day the only relation is that of the tolerance or intolerance of the city of God by the current political authorities. This is one important way in which Augustine’s conception of two cities is more than verbally distinct from Luther’s and Calvin’s conceptions of two kingdoms. For ideally, one of these kingdoms is ruled by the magistrate in a formal arrangement with the church, upholding the confession of the church. Augustine conceives of no such relationship

For Augustine the relationship between the cities is much less formal.  The ethics and ideals of Babylon and those of the church make living together possible. In the last section of the book Augustine makes this clear in  the chapter mentioned earlier, City of God, 19.5. subtitled ‘Of living sociably with our neighbour: how fit it is, and yet how subject to crosses’, and two others: ‘The grounds of the concord and discord between the cities of heaven and earth’.  (City of God, 19.5) And ‘The peace of God’s enemies, useful to the piety of His friends as long as their earthly pilgrimage lasts’. (City of God, 19.26)

Wretched then are they that are strangers to that God, and yet have those a kind of allowable peace, but that they shall not have for ever, because they used it not well when they had it. But that they should have it in this life is for our good also; because during our commixture with Babylon, we ourselves make use of her peace, and though faith does free the people of God at length out of her, yet in the meantime we live as pilgrims in her. And therefore the apostle admonished the Church to pray fore kings and potentates of that earthly city, adding this reason, ‘that we may lead a quiet life in all godliness and charity’. (City of God, 19.26)

The suggestion behind these words is that the relations between the two can be beneficial, and will ebb and flow. Very different from his earlier ‘Christianisation’ views.

So the citizens of the city of God do have business in the city of Babylon. Reading some of Augustine’s letters one is struck of the seriousness and naturalness with which he corresponds with Roman officials in Babylon about matters of administration, and how he seeks the advantage of the church thereby. But it is not that Augustine is two-faced, but that he is, as a cultivated Christian Bishop, at the interface of church relations with Babylon. He wears two hats, as all Christians do in Augustine’s conception of the two cities.

Augustine does not have a concept of common grace, though there are occasional references to the ‘good gifts’ that God grants to the inhabitants of the city of this world. (City of God, 15.4) And he does have a rudimentary idea of natural law, the eternal law, from Scripture and from the Stoics such as Cicero. The members of the city of God have duties to their pagan neighbours. Earthly peace is important though not all-important. Hence his discussions of just and unjust wars in the City of God

But, so it seems to me, such activity in the ‘cities’ is thoroughly consistent with Augustine’s conception of their different character. Augustine was not an Anabaptist, and though other - worldly, he does not seek to flee from duties and responsibilities arising from the intermingling of the two cities. As a citizen of the heavenly city, he was also within the earthly city. The discharge of earthly duties is a social and may be a political matter.  But a person’s religious view as a Christian is not for Augustine a political matter as far as the earthly city is concerned. So at leastAugustine seems to have argued.