Jonathan Edwards and the Rabbi 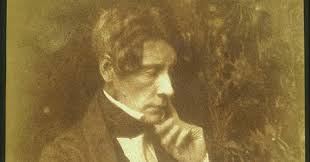 I dissent from Jonathan  Edwards’ doctrine, because he hazards a speculation, on will qua will, and therefore in reference to all will, divine and human. It is fatal to establish a necessary chain throughout every will in the universe. The divine acts are free, They are necessary, I maintain, qua moral, though free qua will. But I am a determinist as much as Edwards.

That’s John ‘Rabbi’ Duncan, in his Colloquia Peripatetica. Page 29 of the last edition, 1906.  This book is one of a few that I cannot put down when I open it. Here’s a link for a free electric copy: (Colloquia Peripatetica .. : Duncan,  John : Free Download,
https://archive.org/details/colloquiaperipat00dun) There's also Only A Talker ed. John Brentnall, published by the Banner of Truth, which features his sayings.

I dare to say that ‘Rabbi’ Duncan  has not got things quite right on Edwards.

A couple of posts back in Helm's Deep, there are some remarks on divine freedom, focusing on a detail of the Westminster Confession, Chapter 2. God is said there to be  ‘most free’. What  follow are some further remarks on this topic.

Edwards was a classical theist, stressing divine fullness. He wrote in correspondence to a Scottish friend after his ejection from the Northampton pulpit, that he could subscribe to the Confession. Although he was a compatibilist regarding the mutable creation, he was in fact able to distinguish the Creator from his creatures, and did so.. In Part III In of his Freedom of the Will he has a chapter or section of Part IV, Section 7, entitled ‘Concerning the Necessity of the Divine Will’. His point is that though God‘s perfections could not be other than they are, nevertheless God is worthy of our worship and admiration, of praise and thanksgiving. God does not create or change or modify his perfections. The Supreme Being is the source of all other being. Creation is the model. He spoke and it was done. Those creatures that are external to him do not determine God's actions, he acts according to his untold power and wisdom. His ‘will was not confined, kept under, and held in servitude by something, which, as it were, maintain a strong and invincible power and dominion over it, by bonds that held him fast, and that he could by no means deliver himself from’. ‘Tis no disadvantage or dishonor to a being, necessarily to act in the most excellent and happy manner, from the necessary of his own nature. This argues no imperfection, inferiority or dependence, nor any want of dignity, privilege or ascendency.’ (377)

And so on. God is most necessary and free by being himself. What I venture to say that “Rabbi” Duncan has missed is this distinction between Creator and the creature’, in supposing the idea of determinism would have a parallel effect on both the Creator and the creature if determinism is granted on either, or on both. The creature is a product of the creation, it depends on it and is constrained by it, and has freedom as the power and choice that he or she is gifted with.  The Creator is by definition radically other than this. He is not created, but his possessed of aseity, aseitas, independence, (Not that he has created himself! For he is not created full stop.)

More to the point, nothing in the reality of God can be ultimately determined by any source outside himself. He cannot be determined. Hence he cannot have a determiner. Hence determinism cannot touch him. His actions are expressions of power and wisdom of which grandest of creatures have no real understanding, though we all have some. Rom. 1.18-20) . So if the creature is determined ad extra in everything he does, and so is determined, the Creator cannot be determined. So determinism in that sense cannot touch the Creator. So the question of whether God is acted upon does not arise.

So I suggest Duncan is mistaken to attribute creaturely conditions to the creator (‘It is fatal to establish a necessary chain throughout every will in the universe’ but Edwards does not attempt this, but the reverse). But at the same time God does not have any indeterminateness in his action, no  absolute indifference. This is the state of divine sovereignty. As in Acts 15.16.  James is speaking to the Jerusalem Council, The ESV reads, ‘known from of old’, the  NIV  ‘and have been known for ages’, and best of all the KJV, ‘known unto God are all his works from the beginning of the world’’. This is part of his citation of Isa.45.11.

But though Edwards holds that God had no reason to change whatever is in his plan, this emphasis on the nature of divine freedom does not mean for Edwards that God cannot be thought of making such a deviation , for he says that God could do what he has not in fact done. This is not the biblical case like Christ refers to the stones that could have been turned into children of Abraham.  “Do not presume to say to yourselves, ‘We have Abraham as our father’, “for I tell you, ‘God is able from these stones to raise children to Abraham.’ ”  (Matt. 3.9) Christ refers openly to what God is able to do.

The Bible refers to matters that could have happened but have not occurred nor never will occur. Christ refers to the stones that could have been turned into children of Abraham. “Do not presume to say to yourselves, ‘We have Abraham as our father’, for I tell you, ‘God is able from these stones to raise children to Abraham.’ ”  (Matt. 3.9) This is clear.

But in Edwards’ case there are instances of him thinking what God could have done, or that he thinks that God could do. These are some of what we can call his ‘thought experiments’. These are experiments in language, part of the stock in trade of philosophers. They have a long history, but Locke gave them a new lease of life, and Edwards follows Locke. By them you are intended to put pressure on your intellectual intuitions,.

In his book on the freedom of the will he uses thought experiments sparingly. For example, he writes in Part IV S. 8, ‘Some Further Objections Against the Moral Necessity of God’s Volitions Considered' (364 f.) as follows – ‘Let us for clearness’ sake suppose, that God had at the beginning made two globes….. ’perfectly alike in every respect, and placed them near one to another……..

The details do not concern us. The fact is, here is a supposition on Edwards’s part’, which for all we know God did not choose and may never have chosen. The question is, given what Edwards allows regarding God’s necessity, is such a supposition allowable consistently? Everything that happens is an expression of the wisdom and power (and other perfections) of almighty God. Is this supposition about God warranted? Is any supposition about God that we devised from our own heads, warranted? Here is something that God has not done. Human beings may have done other than what they did. But in Edwards's doctrine of God cannot do other than what he has done. For him 'it is impossible but that God should be good'  (480) and this impossibility reaches down to each expression of that goodness, no matter how seemingly trivial.

Perhaps this reaction is over-scrupulous. But isn't Edwards on dangerous ground here? Or because he is warranted by Jesus,  who taught  that God could have done things that he did not do, then so may we? In any case, he was notably cautious. Perhaps he wanted to avoid the slippery slide ahead.