In August I hope to post some remarks on Rob Lister's God is Impassible and Impassioned: Toward a Theology of Divine Emotion (Crossway/Apollos), which is a full length discussion of divine impassibility. This is a topic on which there have been posts at Helm's Deep in the past. The book is valuable in providing a good deal of information on the historic position on divine passibility, and the rise of the stress on divine passibility, which is such a feature of modern theology. Lister also offers some proposals of his own. The post will be on the doctrine of God that Lister proposes, the 'model', one which seems to be attractive to several evangelical theologians at present.

In September it is hoped to return to the theme of rebellion, looking at the early Reformed pamphlet Contra Tyrannos.

If you have an interest in Baptist history, or church history more generally, note that there is a two-day Conference in September at the Andrew Fuller Center, Southern Baptist Seminary, Louisville, 'Andrew Fuller and his Controversies'. Further details can be found at events.sbts.edu/andrewfuller
Posted by Paul Helm at 5:55 AM 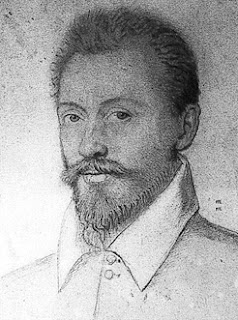 Philippe Du-Plessis Mornay (1549–1623), widely regarded as the author of Vindiciae Contra Tyrannos, by 'Junius Brutus',  an early Calvinist defence of civil rebellion, published in Basle in 1579

I’ve heard it said that John  Calvin was not in favour of rebellion against the government, and that it was John Locke to whom would-be rebels looked to justify Christian rebellion, as we might call it. For a recent example of this view see here.  But I think the matter is a bit more complicated than that, and that a case can be made for Calvin leaving open, in fact if not in intention, the legitimacy of rebellion as a last resort against civil injustice.

It is worth remembering that Calvin’s view of government was aristocratic.  The king's power was not to be absolute, but he is to govern together with his nobles. Calvin’s treatment of civil government is in Book IV of the Institutes, the last chapter (20). At the beginning of Book IV Calvin explicitly links to his earlier teaching on the two kingdoms. (Book III.19)

The former [kingdom], in some measure, begins the heavenly kingdom in us, even now upon earth, and in this mortal and evanescent life commences immortal and incorruptible blessedness, while to the latter [kingdom] it is assigned, as long as we live among men to foster and maintain the external worship of God, to defend sound doctrine and the condition of the church, to adapt our conduct to human society, to form our manners to civil justice, to conciliate us to each other, to cherish common peace and tranquility. (IV.2)

You might ask why if Calvin holds to the two-kingdom doctrine, the Institutes should contain any instruction in political matters. The answer is because he believes that the NT teaches that government is warranted and put in place by God. As Paul says, the powers that be are ordained of God. Christians need to be reminded of this, he thinks, just as they need to know what the limits are to the powers of government.

It is widely believed even amongst Reformed people that Calvin was mistaken in including the part that I have underlined among the duties of the civil magistrate. The state should not try to protect the profession of the faith, (as Calvin thought) but (instead) provide a public square in which any religion and none may or may not peaceably flourish. Calvin was a stranger to freedom of worship and toleration, as he was to a universal electoral franchise. He interpreted Paul’s words to Timothy ‘that we may lead a quiet and peaceable life in all godliness and honesty’ rather more strongly than most Christians today would interpret it.  But nothing (I think) turns on this in what follows.

The forms of government

In Chapter 20 of Book IV Calvin also says something about forms of government in general.

…..and if you compare the different states with each other, without regard to circumstances, it is not easy to determine which of these has the advantage in point of utility, so equal are the terms in which they meet. Monarchy is prone to tyranny. In an aristocracy, again, the tendency us not less to the faction of the few, while in popular ascendency there is the strongest tendency to sedition. When these three forms of government, of which philosophers treat, are considered in themselves, I, for my part, am far from denying that the form which greatly surpasses the others is aristocracy, either pure or modified by popular government, not indeed in itself, but because it very rarely happens that kings so rule themselves as never to dissent from want is just or right, or are possessed of so much acuteness and prudence always to see correctly. Owing therefore to the vices or defects of men, it is safer or more tolerable when several bear rule…..

So, Calvin favours aristocracy because of the need for the operation of what later came to be called checks and balances. To put the point otherwise, the king needed his nobles as they needed him.

In the course of his chapter on Civil Government, Calvin also has things to say about the fact that there are  different ways that  the magistrate may express the natural law of God.

Yet we see that amid this diversity they all tend to the same end. For they all with one mouth declare against those crimes which are condemned by the eternal law of God. – i.e. murder, theft, adultery and false witness; though they agree not as to the mode of punishment. This is not necessary, nor even expedient. (IV 20.17)

This is valuable for  those who see here a  recognition of distinctive elements of the New Testament  in Calvin’s understanding of the relation between the church and society, and not an attempt at a re-production of Mosaic theocracy. In recognizing legitimate differences in the way that the natural law is administered in different nations he recognises the international character of New Testament Christianity. These different modes of administering the law are, Calvin says, to be seen as different ways in which the magistrates' sense of equity may be expressed.

But can Calvin be saying that the natural law, however understood, must be seen as a legitimate recognition of the natural law, God’s ‘eternal law’? This cannot be, for in his commentaries and elsewhere Calvin pays attention to the ‘barbarous’ nations. Barbarous nations are presumably those that do not give appropriate recognition of the natural law. And in any case he cannot think that whatever edicts the magistrate upholds are, simply in virtue of his upholding them, made equitable and so legitimate. (Note what he later says about the 'undue license ' of kings.) That is surely the road to tyranny.

We can at least say this. Calvin’s distinction between the equity of the natural law and the various ways in which is concretely interpreted and applied in different societies opens up a gap or fissure to allow a critic of the status quo to probe the question: This is the law, but is it equitable? And to cite certain arrangements as oppressive and a legitimate target for rebellion.

Besides the issue of resistance to tyranny, and of equity, there is also the matter of civil disobedience. Calvin was against the government forcing people to sin, forcing them to attend the Mass, say. No, he said, Christians are to obey God, not men. So they must either publicly dissent by refusing attendance, and take the consequences, or flee. No Nicodemism! But are not such acts (or abstentions) of individuals, acts of civil disobedience?

But in that obedience which we hold to be due to the commands of rulers, we must always make the exception, no, must be particularly careful that it is not incompatible with  obedience to Him to whose will the wishes of all kings should be subject, to whose decrees  their command must yield, to whose majesty their sceptres must bow….

But what has civil disobedience to do with rebellion? Quite a bit, actually. Suppose that the number of Reformed Christians in France had been much greater than it was and these had agreed with Calvin in not adopting Nicodemism, then one can conceive of widespread instances of civil disobedience. And such passive resistance, as we know, can sometimes be brutally suppressed by the authorities. But also as we know, it can be successful in bringing about change. We need think only of Gandhi in colonial India,  and the civil rights movement in the US.

These data - on the scope of government, on aristocracy as the preferred type of government, on government and equity, and on civil disobedience - provide the background to his brief remarks on rebellion in the closing paragraphs of the Institutes. First, vengeance against the tyranny of kings.

Although the Lord takes vengeance on unbridled domination, let us not therefore suppose that that vengeance is committed to us, to whom no command has been given but to obey and suffer. I speak only of private men. For when popular magistrates have been appointed to curb the tyranny of kings…and perhaps there is something similar to this in the power exercised in each kingdom by the three orders, when they hold their primary diets. So far am I from forbidding these officially to check the undue license of kings, that if they connive at kings when they tyrannize and insult over the humbler of the people, I affirm that their dissimulation is not free from nefarious perfidy, while knowing that, by the ordinance of God, they are its appointed guardians.

So Calvin is saying that God in his providence may arrange things so as to bridle the tyranny of kings. The instruments he uses for this may undertake this role consciously, or they may be God’s unwitting partners. And the 'popular magistrates' have a responsibilty to curb the 'undue license' of kings, a responsibility which they may shirk. What then? Are there any other avenues of permissible resistance to the king? Calvin did not go so far as to say that this can ever be an option for Christians.

Yet it can be argued that for all his personal conservatism, there were, in Calvin’s view of civil society, enough chinks and fissures through which a case for rebellion against civic injustice could be developed. Calvin himself was certainly not an advocate of rebellion. Far from it. But what of those who came after? That this is the road that some Calvinists trod can be seen from Quentin Skinner’s The Foundations of Modern Political Thought, Volume 2: The Age of Reformation.

Next time, a look at the Contra Tyrannos