N.T. Wright’s answer in a question and answer session to a question about hell is an object lesson in evasion. Trevin Wax and Carl Trueman have had interesting and appropriate things to say about it, but neither has noted publicly how Dr Wright conducts himself in giving the interview.

This is how it goes. When asked about the reality of hell, Wright says that his usual counter question is why Americans are fixated on hell.

My usual counter question is: “Why are Americans so fixated on hell?”

But why should there be a counter – question of that kind to what is a perfectly straightforward question, though a difficult one? And why should one usually have that counter-question ready to hand? Politicians routinely use this ploy. Divert one question by asking another. When for whatever reason you do not wish to answer the question, ask another. There was a famous occasion when Jesus did this, but that was when evil men were straining to entangle him. No one is trying to trip Wright up, as far as I can see. Why should a noted church leader duck and weave? Why not answer the question about hell? To use the language of a past Leader of the House of Commons, why not ‘Spit it out!’?

Whatever the reason he has, here is Wright using a question to change the subject. He goes on

why is it that the most prosperous affluent nation on earth is really determined to be sure that they know precisely who is going to be frying in hell and what the temperature will be and so on. There’s something quite disturbing about that, especially when your nation and mine has done quite a lot in the last decade or two to drop bombs on people elsewhere and to make a lot of other people’s lives hell.

For what has a government’s policy to do with questions about hell? Not much, even from Dr Wright’s standpoint. For while both governments drop bombs, according to Dr Wright only the Americans (by the working of some subterranean transatlantic mechanism, perhaps) are prompted by their government’s policy to ask questions about hell. The British drop bombs but, according to Dr Wright, don’t show much interest in the reality of hell. The idea seems to be that so long as America and the UK drop bombs, questions abut the reality of hell ought not be asked. Or at least, maybe they can be asked, but please don’t expect Dr Wright to offer a straightforward answer to them.

Now note the exaggeration, and the non sequiturs. It is of course diverting to use the language of ‘frying’ and ‘what the temperature will be’, and to speak of making people’s lives hell. We smile at Wright’s language, shuffling our feet rather awkwardly, or perhaps protest. But whether we smile or or protest, and whether Wright intends such reactions to occur, by this stage in the answer we’ve lost the thread. (It wouldn’t be quite kosher, would it, to ask in turn what it is about Wright’s personal psyche that promotes this tendency to evade questions. For we all understand, don’t we, that why a person asks a question may be one thing, the question itself, another.)

Having got that off his chest, Dr Wright tells us that he is not a universalist and never has been.

the New Testament is very clear that there are people who do reject God and reject what would have been His best will for them, and God honors that decision.

But this, again, is hardly to the point of the question, as Dr Wright must realize.

Then, with respect to Rob Bell’s recent book

I do think it’s good to stir things up because so many people, as I say, particularly in American culture, really want to know the last fine-tuned details of hell.

You see the tendency of this? It’s good to stir things up by advocating universalism, but not good to ask a straight question about the reality of hell. (If Dr Wright is weary of being asked this question, then he should say so, and refer us instead to which of his books provides his views.)

And then there’s some more exaggeration.

Yes, of course. But note the vagueness, the lack of specificity of such a charge. ‘It seems….often’. Another smoke bomb. Maybe there are the people whom Dr Wright surmises to exist, people who think that they know who is going to hell, and who spend their time gloating over this rather than worshipping at the foot of the Cross and helping the helpless. Maybe there are those who forget that there are many that are first that shall be last, and the last first. Maybe they routinely flout Paul’s rule to judge nothing before the time when the Lord will bring to light the hidden things of darkness. But why should the fact that there are such people, if in fact there are, prevent any one pressing a Christian leader for a straight answer to a straight question about the reality of hell, or prevent him answering it?

God is not a horrible ogre who is just determined to fry as many people as He can forever. God is actually incredibly generous and gracious and wonderful and loving and caring. And if you paint a picture of God which is other than that, then you’re producing a monster and that has long-lasting effects in Christian lives and in the church.

Of course. But the New Testament does not offer us the choice between God’s justice and his generous and gracious love in quite this way, does it? For someone who takes seriously what the New Testament teaches about the goodness and severity of God, as Dr Wright does, that’s not an answer to the question about the reality of hell, either. It simply asks that question all over again; indeed it makes the question even more pressing.

The Bible - the Book of Proverbs and the New Testament in particular - has much to say about the ‘ethics of speech’. Those who currently stress the performative, speech-act character of language, should understand this. To speak is to act and so like all our actions, our speech has a moral texture.
Posted by Paul Helm at 5:31 PM

Can This Be True? 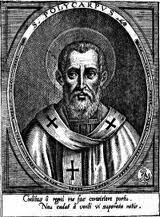