Analysis 22 - The Gift of Gill 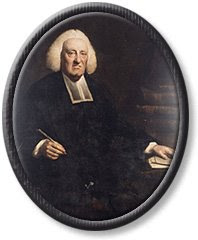 John Gill (1697-1771)
While true Religion, and sound Learning have a single friend remaining in the British Empire, the works and name of Gill will be precious and revered. – A. M. Toplady

John Gill I reckon the best, as well as the most learned, of all the Hyper-Calvinists. The rabbinical and the patristic were fairly blended in him. He mistakenly charges us with what he calls “Duty-Faith”, but he was a good and reverent man. - ‘Rabbi’ Duncan


The great Baptist pastor/theologian John Gill is generally given the thumbs down at present. I’m guessing, but I think that his has chiefly to do with his alleged ‘hyper-calvinism’, and with the general demise of systematic theology among Reformed or Calvinistic Baptists. I think, also, that his aloofness from the Evangelical Revival does not recommend him to some, though others who were actually engaged in that work, such as A.M. Toplady, rather than those who merely admire it from afar, greatly valued Gill. But his denial of the ‘free offer of the Gospel’, (if indeed he did deny it) is enough to damn him in the eyes of some. There’s also the portrait above, sometimes reproduced in black and white, of a bewigged and sour-looking Gill, which hardly attracts.

In this Analysis I should like to offer some words of praise for his work, and a short reassessment, referring both to his Body of Doctrinal and Practical Divinity, (1769-70) his mature theological work, as well as his earlier The Cause of God and Truth (1733-8) Besides these there is his multi-volume Exposition of the Old and New Testament and many other shorter pieces of writing, such as his exposition of the Song of Songs, and a number of Tracts, many of which are substantial. But I shall say nothing about these in what follows. It is said that he wrote more than 10,000 pages, all in his own hand.

Richard Muller, in his Post-Reformation Reformed Dogmatics, frequently mentions Gill, and he is in my view entirely correct to include him in his magisterial survey of Reformed Orthodoxy. However, Gill is not a scholastic theologian in the true sense. For while the arrangement of his theological work generally follows that of many scholastically-minded theologians, his style is clear and flowing, utilising the technical terms of systematic theology in the same easy, clear, unassuming yet confident way in which he gives evidence of his vast learning. He is a covenant theologian, but while this motif is prominent it is not all-controlling as it is with some of the Dutch covenant theologians. His meaning is generally clear. His style seems to have arisen from his preaching and expositions and his great knowe of Scripture. If the style of John Owen puts you off, (‘a continent of mud’, according to Robert Hall), try Gill.

Here I shall briefly try to assess the charge of ‘hyper-Calvinism’. The criteria of ‘Hyper-Calvinism’ are generally thought to be the denial of the place and use of the law in the Christian life, the doctrine of eternal justification, whether belief in the Gospel is a duty, and the denial of the ‘free offer’ of the Gospel. According to Peter Toon, (Hyper Calvinism 145) it’s also characteristic of hyper-Calvinism to deny the distinction between the secret and he revealed will of God, but Gill certainly upholds that distinction. (BDD 71f., CGT 278, 286) What these features appear to have in common is an underemphasis on human responsibility and initiative amounting to a denial of such responsibility in some respects; and of course, a correspondingly heightened emphasis on sovereign grace in election, justification and regeneration.

Care is needed in approaching this territory. For while some of these matters, such as eternal justification, are straightforwardly doctrinal, others of them, such as the preaching of the law and its uses, and the ‘offer’ of Christ, have to do with practice, with ministerial or pastoral emphasis. Making an emphasis is a matter of judgment, and does not necessarily indicate the denial, as a matter of principle, of the opposite emphasis. Someone may judge that a situation requires emphasis upon the law, or on warning and rebuffing an enquirer rather than warmth and encouragement. Christ’s teaching about the narrow gate, the fact that many shall strive to enter in and shall not be able (a text that, I imagine, is rarely preached on at present), or his rebuffing of the Syro-Phoenician woman, might be said to be tactical rather than principled, as is shown by the warmth of his invitations in other situations.

Let’s look at our three criteria in turn

The use of the law. The issue here is whether the moral law of God is to be understood as providing the ethical standard for the believer, and is the Christian life characterised by a sense of obligation to keep that law. Or is Christian conduct placed on an altogether different footing, such the believer’s indwelling by the Holy Spirit, his being ‘free from the law’ or even (as in extreme circumstances) the fact that Christ is not only our justification but our sanctification too. Gill’s understanding is clear and unambiguous, it seems to me. Writing of the ‘liberty of the sons of God’ in his treatment of adoption (BDD VI.9), the believers’ freedom from the law, he says that they are free ‘from it, as a covenant of works, obliging to work for life; but not from it a rule of life, walk and conversation’. (525) This position is borne out by what he writes, at greater length, of ‘Various Duties, Personal, Relative, Domestic and Civil’ and offers a ‘Compendium’ of the Ten Commandments, in the last Book of BPD (IV.6)

Eternal Justification. Gill discusses justification in two places, in his doctrine of God, and in the application of redemption. His discussion of the doctrine of God is in terms of a distinction between the eternal being and decrees of God, (Books I and II) and the external works of God , creation, providence and redemption in time. (Book III-VII). He provides a vigorous defence of eternal justification, appealing, among others, to Ames and Thomas Goodwin, and arguing against Turretin. God’s will to justify his elect is his justification of them (203); this will ‘resides in the divine mind, and lies in his estimating, accounting and constituting them righteous, through the righteousness of his Son….from eternity’. (203) But there seems to be a bit of confusion here. God’s decree of election is his electing of his people; but it is hard to see how the decree to justify his people is their justification, any more than decreeing the building of the Tower of Babel is the building of it. Strictly, God’s decree is not ‘of justification’, but ‘to justify’, something which, Scripture tells us, takes place in time; in Christ, who was raised for our justification, and through faith, which gives us peace with God.

Gill does not deny, of course, that there is a sense in which justification takes place in time, but that sense is modified somewhat in the light of his formulation of eternal justification. He denies that faith is in any sense the cause of justification, not even the instrumental cause (204), and faith is the ’evidence and manifestation of justification’. (204) Earlier, in CGT, he seems to allow an instrumental role to faith; it is the hand by which the promise of pardon is received. (e.g. 288) Perhaps he changed his mind. But in a discussion later in BDD, in his treatment of faith, he states that faith ‘receives the blessing of his justifying righteousness from him (Christ)…faith puts on the robe of righteousness and rejoices and glories in it’. (743). So there is some wobbling here, some inconclusiveness. For a reason which is not clear Gill expends a disproportionate amount of effort to maintaining and vindicating eternal justification.

Still, even if Gill does hold to eternal justification, this seem to be a mark of ‘high Calvinism’ rather than ‘hyper Calvinism’, certainly not a decisive feature on the ‘hyper’ issue. Thomas Goodwin is not routinely thought of as a hyper-Calvinist even though he espouses the idea of eternal justification in his Objects and Acts of Justifying Faith.

The 'Free Offer'. From time to time there is agitation about the ‘free offer’, and even the precise language that the preacher may permit himself to use to the unconverted. Perhaps he may say, speaking generally, ‘God loves you’, or even ‘Christ died for you’; and perhaps it is better not to say ‘Christ died for you’ but rather ‘Christ is dead for you’. Or perhaps not. But it looks like this road leads only to the briar patch. Obviously no single sentence or short formula will do the trick, since what a person says in the pulpit or elsewhere depends upon what else he says, as we have already seen.

What of Gill himself? At least in his Body of Divinity he underlines the importance of preaching to men and women indiscriminately. For example, ‘He hath set for Christ in his purposes to be a propitiation through faith in his blood for the remission of sin; and he has sent him to shed his blood to obtain it, and has exalted him as a Saviour to give it, and to him give all the prophets witness, that whosoever believes in him shall receive it’ (733) And he has a robust attitude to evangelism. The ministry of he gospel is ‘for the enlargement of the interest of Christ in the world; and it is by means of the gospel being preached to all nationals in all the world, that the kingdom of Christ has been spread everywhere...’ The ministry ‘is for the conversion of sinners; without which churches would not be increased nor supported, and must in course fail, and come to nothing’. (931) There are places in which Gill rejects the ‘free offer’ the 'offer, or tender of the new covenant' but appears to distinguish this from 'offers of Christ, and tenders of the gospel' which he also distances himself from, though in less robust terms. (CGT 339). I hope in the near future to post an Analysis on the 'free offer', which might be the place to look at Gill further.

Idiosyncracies and emphases which we may regard as unguarded and in need of qualification are not a sufficient reason for us to close our minds to all that Gill has to offer.

In the next Analysis we shall look at what Gill says about obligation and ability in his The Cause of God and Truth.