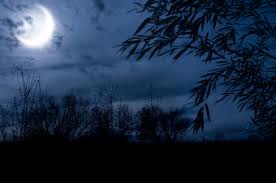 October on Helm's Deep will have a distinctly epistemological feel to it. If economics is the 'dismal science' then perhaps epistemology is a if not the dismal part of philosophy, another part being ethics. My old Head of Department thought that ethics was 'not a subject', any more than was the philosophy of religion. Yet he generously gave his support in the Department to the development of courses in both areas. (He thought that these were not subjects but then, he was prone to reflect, who was he? Only one amongst several colleagues. Even if you think to yourself that you have won the argument, you might nevertheless lose the vote. Not very Talibanesque, but very civilised: let's hear the arguments, and then take a binding vote.)

So epistemology is perhaps a fit topic for reflection as, at least in the Northern hemisphere, the nights get longer.

To begin with, during the first days of the month I shall post a piece about scepticism and 'hoping against hope', drawing on (and re-presenting) Pascal's familiar Wager Argument. And towards the end of the month (or perhaps into November, the nights getting even longer),  I shall discuss a little-known (or perhaps I had better say 'little-discussed') article on God's knowledge of Alvin Plantinga's that has an uncharacteristic apophatic edge to it.  I shall discuss what Plantinga says and have some things to say about the place of apophatic language in theology (including of course philosophical theology) more generally.
Posted by Paul Helm at 8:15 PM

Southern California to awaken from its dogmatic slumbers?


The first annual Los Angeles Theology Conference is announced. This will take place  on January 17-18, 2013 on the Biola University campus.

The Conference, which is a joint initiative by Fuller and Biola,  is entitled Christology, Ancient and Modern: Explorations in Constructive Theology and seeks to make a positive contribution to contemporary dogmatics in intentional engagement with the Christian tradition.

“As a newcomer to Southern California I was struck by the fact that there was not a regular forum in the LA area where theologians from different institutions could meet and discuss Christian  theology. It is our hope that through these meetings systematic theology may be invigorated and new conversations and dialogues across traditions and disciplinary boundaries begun.”

Zondervan Academic is to sponsor the Conference proceedings.

Fuller information regarding the Conference, and details about attendance and the submission of papers, will be found at www.LATheology.com

Turretin on the Senses 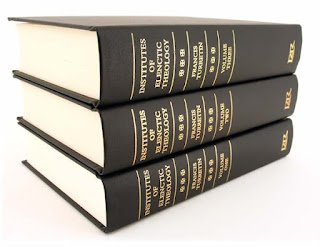 
In the course of his long discussion of the doctrine of transubstantiation in the Institutes, Calvin wrote this about the body of Christ: ‘The body with which Christ rose is declared not by Aristotle, but by the Holy Spirit, to be finite, and to be contained in heaven until the last day.’ And also, more generally

What is our flesh? Is it not that which consists of certain dimensions? Is confined within a certain place? is touched and seen? And why, say they, may not God make the same flesh occupy different places, so as not to be confined to any particular place, and so is to have neither measure nor species? Fool! Why do you require the power of God to make a thing to be at the same time  flesh and not flesh? It is just as if you were to insist on his making light to be at the same time light and darkness. He wills light to be light, darkness to be darkness, flesh to be flesh…..Flesh must therefore be flesh, and spirit, spirit; each under the law and condition on which God has created them.. Now, the condition of flesh is, that it should have one certain place, its own dimensions, its own form. (IV.17. 24)

Some years later Francis Turretin transposed these points into a general approach to the senses in relation to the revealed mysteries. The basic question is when the senses are relevant:

That is to say, the evidence of the senses is to be admitted when it deals with an area in which that sort of evidence is relevant, when ‘a spiritual is joined with a corporeal thing’. One of the problems with the doctrine of transubstantiation is not that the presences of Christ at the celebration of the Supper is mysterious – it certainly is - but that that mysteriousness is construed in a way that violates the basic testimony of the senses. In the Supper there is a double aspect - the corporeal is the vehicle of the spiritual. Through the elements of bread and wine the presence of Christ is brought near, as we recognize the elements for what they are, a matter in which the senses are involved, and as the word accompanies their distribution and provides us with the understanding of what is going on.  To suppose that Christ is bodily present under the appearance of the bread violates the basic  evidence of our senses, and has serious consequences for our understanding of the real humanity of the risen Saviour. Further, it requires that the real human body of Christ is distributed across countless locations where the Supper is being celebrated.

So the body of Christ is a real human body, in the Aristotelian category of place or as Calvin preferred, referred to in Scripture as being at in one place at a time as any body is, and any teacup. Each with its own dimensions, its own form. (As Aristotle taught, as no doubt Calvin had not for forgotten). But we don't need Aristotle to teach us this. Such a body can be touched and seem, was touched and seen. It cannot there be a body under the appearance of bread, and  so seen and yet not seen

The biblical support for this real and vital, though limited, place for the senses in our understanding of the mysteries of our faith (when there is a sensory component to these), and in not multipling mysteries unwarrantably, is provided by the place that the senses have in the Gospels. For, Christ appeals to them to prove that it was not a spirit that appeared to the disciples after the Resurrection. Doubting Thomas had his doubts dispersed by what he learned from his senses when in the presence of Jesus. Five hundred people at once saw the risen Christ.

Further, the reception of the preaching of the faith involves the senses. We must hear the preacher, read the book. If the senses are systematically unreliable then how can we get anywhere by studying the Bible, hearing the word, contemplating the works of God? Holding conversations with others? Remembering what we have heard? This was supremely the case in the disciples being in the company of the Incarnate Son, who they saw, and touched, and listened to. Did their senses deceive them?

But how far ought we trust the senses in these matters? They are not infallible, for the are subject to our imaginations and pre-dispositions, tiredness,  and ‘fevers and delirium’. It is necessary therefore to test the senses, in obvious ways. Sometimes it may appear that the senses are defective when in fact we come to a conclusion too quickly, as in the case of Mary Magdalene who supposed that the risen Christ was the gardener.

The senses and nature and grace

Turretin’s carefully circumscribed, subordinate place assigned to the reason and the senses in the understanding of Christian theology is testimony to his belief that faith, the faith, sits atop nature, that grace perfects nature. The relation of grace to nature is that nature is an indispensable subordinate to grace. We see the perfection coming to be by the development of ‘right reason’. Is there a dichotomy between nature and grace? Meaning? They are not at odds, obviously. Is nature ‘autonomous, an ‘autonomous realm’? Meaning? No, nature is not in control of itself,  a purely secular realm, or source, the product of blind forces, however blind the forces may be at the secondary causal level. This nature is the effect of God’s creative agency.  He created mankind with reason, and he sustains human reason, which is a gift to those who have it, and the senses, and memory, all gifts of God. Is this emphasis on reason and nature Arminian? Now we are getting into the realms of fantasy. Is it the gift of common grace? Certainly. The crucifiers of Jesus saw and handled the same body. These structural powers are upheld by sets of secondary causes, and these in turn caused by God, the primary cause. The whole set-up is 'common' – not correlated with or determined by the incidence or power or God’s regenerating grace, but distributed to mankind in general as a result of God’s undeserved goodness.