What are creeds and confessions? 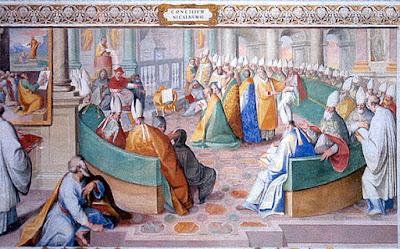 The Council of Nicaea - The SistineChapel

At a time when Christian people are taken up with issues of human conduct and gender, and it seems that doctrine of God  has been left behind, it is a great thing that people are discussing the Trinity. This post is about what sort of documents creeds and confessions are. I am chary about imputing to them a finality that they cannot possess. People have the liberty to think further. Confessions cannot be exact, final.

I think that those churches who recite the Nicene Creed in their liturgy, as the Church of England does in her communion service, cannot hope that history is a way of achieving further understanding. History tells us what happened and (more uncertainly) why. Perhaps the inclusion of the word 'begotten', said of the Son, was to match neo-Platonism. Interesting. But that does not help worshippers today. What is needed for understanding is meaning,  in order to mitigate the puzzlement as the congregation recite the phrases, 'begotten of the Father before all time', 'begotten not created'.

We believe in one God, the Father All Governing, creator of heaven and earth, of all things visible and invisible. And in one Lord Jesus Christ, the only-begotten Son of God, begotten from the Father before all time, Light from Light, true God from true God, Begotten not created, of the same essence as the Father…

Of course to be told that the phrases refer to a complete mystery will not do.  Though it is a deep mystery nonetheless. If A is told that he is meddling in mystery when he requests some words of clarification on the Trinity ad intra, the same goes for other words.   'Mystery' is a tool that cuts both ways. Yet if the creedal words means anything, other than ‘blah-de-blah’, it should be possible for a boned-up minister to tell the inquirer several things that, in his view the phrase ‘begotten not made’ does and does not imply, so enabling his interlocutor to gain a grasp, though not a perfect grasp, but a better-than-nothing grasp, of what is meant by the phrase. He might inform his friend that understanding these words is gaining a partial understanding of divine mysteries. The same applies to everyday things like a cup of milk. There's always more to be asked, and to be  said.

To appreciate this we need to consider for a moment or two what Christian creeds and confessions are. They are not Scripture, of course, and they are at best subordinate standards. They set forth a ‘system of doctrine’ (as in the WCF) or part of that system (as the Nicene Creed sets forth a fundamental part of it.)

What else? They have the nature of ‘articles of peace’. They are forms of words which people can agree upon, and others disagree with. No one voted on Scripture. The development of the canon of the New Testament is a famously obscure business, as if providence has prevented us from thinking of it as we think of confessions and creeds. But it was most certainly not as a result of the votes of the churches that the canon was left open for a while, and then closed. But the WCF and the Nicene Creed were each voted on. They represent the vote, or a series of such votes, in favour of a form of words. The minority is excluded, or exclude themselves from, say, the denial of Arianism that the Nicene Creed is incompatible with, or the Semi-Pelagianism that the Augustinianism of the WCF is incompatible with. The voters-for form the majority.  The non-subscribers are excluded.  Each of the subscribers commits themselves to this form of words, forms of sound words such as Paul recommends to Timothy. The subscribers are a set of individuals coming together to confess the realities depicted by a certain form of words.

But then. Suppose that someone who assents to such a form of words explains his understanding of them. Say an understanding of the words ‘freedom’, ‘liberty’ and ‘contingency’, which recur in the WCF. Or the words ‘begotten of the Father from all time, Light from Light, true God from true God, begotten not created, of the same essence as the Father…’, central to the Nicene Creed and hence to ‘catholic’ Christianity. Sometimes one meets a reluctance to explain them. They are what they are. But this is odd. If we may use non-Scriptural words (words that do not appear in the text) to elucidate the meaning of Scripture, then surely we must be able to do the same with Creeds and Confessions.

However, it is reasonable to expect understandings to differ from person to person. For gaining an understanding in these matters calls for care and discrimination, and not everyone has the same endowment of the necessary gifts, or makes the same demands on the text of the document. And we each come from a particular background, with a unique cognitive mix. And explanations may differ from occasion to occasion. One may emphasise this, another that. But all this, messy as it seems, must be OK, because it is inevitable. Otherwise as far as creedal and confessional subscription is concerned, subscribers would be restricted to parroting. Just as it is necessary that we use non-scriptural words in the exposition of scripture, so it is necessary – inevitable - that non-creedal words and non-confessional words are used in the exposition of creeds and confessions.

So all such confessions and creeds are incomplete, with a degree of ambiguity, or contain ambiguous expressions in the sense that their occurrence does not entail one interpretation, and rule out an alternative. This is not a defect, for there is no end to the process of explanation. Non-ambiguous expressions exclude, and expressions left ambiguous include, allowing for tolerable union.

Sometimes to cope with this deficit in explicitness, confessions and creeds may include negative implications, stating what is not implied by what is said positively, and so to limit the overall ambiguity of what is asserted. So the Nicene Creed of 325 finishes with the words ‘but, those who say, Once he [the Son of God] was not, or he was not before his generation, or he came to be out of nothing, or who assert that he is a creature, the Son of God is of a different hypostatis or ousia, or that he is a creature, or changeable, or mutable, the Catholic and Apostolic Church anathematizes them.’

And the WCF in its chapter on the decree of God (Ch.III), adds the words ‘Neither is God the author of sin, nor is violence done to the will of the creatures, nor is the liberty or contingency of second causes taken away, but rather established.’ The point of Principal Cunningham’s well-known reply to Sir William Hamilton as to whether, in his view, the WCF is compatible with libertarianism, is to identify  ambiguities in the document.  It is clear, he says, that you can subscribe ex animo to it whether you are a libertarian or a necessitarian.

But Jonathan Edwards, necessitarian as he was, who believed that non-necessitarianism is incoherent, presumably would not agree. Edwards said of the WCF, ‘As to my subscribing to the substance of the Westminster Confession, there would be no difficulty.’ But saying ‘I subscribe to the WCF and I understand its use of ‘free’, ‘liberty’ and ‘contingency’ as follows…..’ is an expansion. And B may also offer an expansion, but offer an understanding using a set of words that are not the same as A’s, even flatly contradictory to them. And in the case of the Nicene Creed the use of words such as ‘subordination’,  and so forth are also instances of explanation by amplification.

And it is also true that such explanations may not be the end of the matter. For words breed more words, and the process of explanation can be iterated and further refined. More words to explain the words used to explain the Confession or Creed. In theory there is no end to such iterations. And not only in theory.

Take the anathemas at the end of The Creed of Nicea (325).  Among those who are targeted for an anathema are those who say ‘Once he [the Son of God]  was not', or 'The Son of God was not before his generation’. If you say that the Son of God was not before his generation, meaning these words, then you are handed a red card. But first you have to get your mind around the words. What is impermissible, according to the Creed, is that the Son came to be. Yet he is ‘begotten’, which looks like ‘fathered’, and that seems to imply that that there is causal activity between begetter and begotten. A timeless begetting, then. Perhaps.  But timeless causes are weird. And timeless causes within the Trinity are weirder. Are there any causes that are simultaneous? Perhaps there are, again. But are there any that are timeless? If so, how could we decide which was cause and which was effect?

By contrast, surprisingly perhaps, in one place Calvin says this, on behalf of the doctrine of the Trinity,

Where names have not been invented rashly, we must beware lest we become chargeable with arrogance and rashness in rejecting them. I wish, indeed, that such names were buried provided all would concur in the belief that the Father, Son and Spirit are one God and yet the Son is not the Father, nor the Spirit the Son, but each has his peculiar subsistence. (Inst. I.13.5).

Suppose a person contents himself with Calvin’s words. Would that count as an ‘explanation’ of Nicaea? Is it necessary to confess the faith in a polemical way? John Newton remarked about his people in Olney that their faith and piety was Calvinistic without them knowing what Arminianism was. They were in the happy position of having a non-polemical faith. If so, perhaps there may be explanations of Creeds and Confessions by reduction of commentary on them. Least said, soonest mended. Better, in these circumstances, to adopt the discipline of zipping it.

So, if what you are interested in in subscribing to a document that is intended as an expression of unity and concord, better to stick to the very words, and to keep  your further understanding to yourself. If you don't, and expect your words to be tolerated, or officially endorsed, someone else will surely ask for his further understanding to be tolerated or endorsed. Better that explanations are treated as  mere private or personal thoughts, 'just the opinions' of those who give them, don't you think?