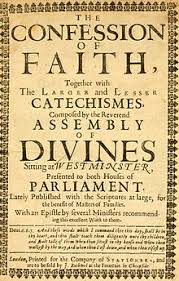 Last time we looked at the wording of the Westminster Confession on effectual calling, more specifically on regeneration. The passivity of the soul in regeneration cuts off any role for the independent human will to ‘accept’ regeneration. The will must first be brought to life by the direct operation of the Spirit.

In this blog we look at the wording of the Confession on middle knowledge. The two themes of the passivity of the self in regeneration and that of middle knowledge, are connected. The Molinist says that God is guided  by his knowledge of what humans would freely choose were they to be placed in certain circumstances. So guided by that knowledge, God creates those people and their wills and circumstances that best fits his wise providence.

The Confession is against this idea. There are at least two passages that particularly caution against it. The first is in the chapter ‘Of God, and of the Holy Trinity’. Consider this statement on God’s knowledge.

II…….[God] is the alone fountain of all being, of whom, through whom, and to whom, are all things; and hath most sovereign dominion over them. To do by them, for them, or upon the, whatsoever he himself pleaseth. In his sight all things are open and manifest;  His knowledge is infinite, infallible, and independent upon the creature, so as nothing is to Him contingent, or uncertain, ……

God as the Creator is the fount of all being and their actions, and his decree is such that it is unqualifiedly ‘independent upon the creature’, that is, not contingent upon what God first foresees what the creature is going to do, or might do, and then decides to do such and such on the basis of what he discovers. Much less is God like a creature among creatures, in time. So the decree as understood by Westminster is eternal, and has no contingent results, but it unfailingly necessitates what is decreed.

This is amplified in the next chapter, ‘Of God’s eternal decree’. The second paragraph reads:

God’s knowledge of all things is ‘independent of the creature’. That is, God’s knowledge is not derived from the creature, but from God’s own counsel.  His decree is absolute. He does not know as we do, by first learning, and then by inspecting our fellow - creature and what he might do, as states of affairs in his own mind, but every creature that comes to exist, and all their actions, are decreed as God sees fit.  From untold possibilities in his mind he selects a set of states of affairs, down to the last dot. The hairs of our head are all numbered.

This tells us something very important about the Westminster divines’ understanding of divine knowledge. You might think that ‘foreknowledge’ is a weaker idea than predestination. But that is not so. Predestination arises from foreknowledge, not the other way round. Divine foreknowledge is of course a biblical concept. So let us consider two or three occasions of its use in Scripture. Here are three instances of the verb ‘to foreknow’ applied to God and his works:

…. ‘this Jesus, delivered up according to the definite plan and foreknowledge of God, you crucified and killed by the hands of lawless men’ (Acts 2.25)

‘…for those whom he [God] foreknew he also predestined to be conformed to the image of his Son….. (Romans 8. 28)

God has not rejected his people whom he foreknew…(Rom. 11.2)
The first of these, the crucifixion, was according to God’s plan. God had a plan and he brought it to pass according to his foreknowledge of it. The Scripture teaches a number of times. It is a leading motif of Mark’s Gospel that Jesus had foreknowledge of what would befall him in Jerusalem. The source of his foreknowledge was not the disciples, or Pilate, or the Jews, or Judas, but his own mind, part of whose fullness was to have a plan which he foreknew. The second shows that divine foreknowledge is the source of his predestination. It is more basic than predestination. In this second passage ‘foreknowledge’ is virtually synonymous with election. On what he knows, he predestines. The third case shows  that God’s care for his people is grounded in his foreknowledge, his plan for them. It shows how foreknowledge operates, as something that is first in the mind of God and then is made actual in the course of events, as one would expect.

Essential to God’s middle knowledge, is knowledge that is not unconditional but is conditioned upon the creature.   Middle knowledge has the supposition that human beings possess a strong libertarian  will. Suppose he does. The God's foreknowledge would at best a ratification of the choices of the will. This is a sharp difference from Confession’s idea of divine foreknowledge as unconditional, as unfailingly directive of God’s plan, as having its source in God’s mind alone. This view  embodying libertarian choice characterizes modern Calvinist attitudes to middle knowledge – actually Arminian attitudes -  since Alvin Plantinga ‘rediscovered’ Molinism during work on his free will defence.

Foreknowledge is based on God’s ‘middle knowledge’, so-called because it is allegedly in the ‘middle’ between all the possibilities and necessities God knows, called his eternal knowledge, and all that he wills to do, called his free knowledge. The Reformed deny that there is such knowledge.

The teaching of the Confession is not simply that God is omniscient, but that he is independently himself, his knowledge is his own resource. He is not dependent on the creation even in determining matters .

The Westminster chapter on providence ought also to be consulted.

V.1. God, the great Creator of all things, does uphold,  direct, dispose, and govern all creatures, actions, and things, from the greatest even unto the least, by His most wise and holy providence,  according to His infallible foreknowledge, and the free and immutable counsel of His own will, to the praise of the glory of His wisdom, power, justice, goodness, and mercy.

So his knowledge of the creatures  does not at all proceed from investigating what the creature will do. God already knows that from his necessary knowledge, including what the creature would do if placed in such and such circumstances.
When Reformed theologians such as Samuel Rutherford and William Twisse offered critiques of middle knowledge (in Latin), their basic point was that Molinism overthrows the absoluteness of the divine decree, its unconditionality. They paid less attention to the Molinists’ strong libertarianism, though this view of human freedom was criticised in other places.