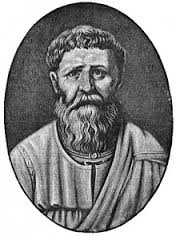 When in the City of God  Augustine compares the two cities and their inhabitants in some way, the theme of pilgrimage becomes prominent. As in chapter 17  of Book 19, ‘The grounds of the concord and discord between the cities of on earth as being engaged in pilgrimage.(City of God, 17.19) Such people live by faith and at the same time take advantage of the peace of the earthly city. They live ‘as it were, in captivity, and having received the promise of redemption, and diverse spiritual gifts as seals thereof, it willingly obeys such laws of the temporal city as order things pertaining to the sustenance of this moral life, to the end that both the cities might observe a peace in such things as are pertinent thereunto.’

This peace [that is, the peace of the heavenly city], is that unto which the pilgrim in faith, refers to the other peace, which he has here in his pilgrimage; and then lives he according to faith, when all that he does for the obtaining thereof is by himself referred unto God, and his neighbour withal, because, being a citizen, he must not be all for himself,  but sociable in his life and actions.(City of God, 19.17)

Another ingredient in his two cities view was his recognition of the ‘ordinary daily judgments’ of God ( City of God, 20.1) as operating on the just as well as the unjust. His view was not that the profession of Christianity afforded a cover of protection against daily troubles and disappointments, a bubble in which those within could see the problems of others while having none of their own. But as we have seen in his preaching for Augustine,  being a pilgrim was fuelled by a disparagement of the achievements and standards of this world, and by the celebration of its passing and its supplanting by the eternal city of God.

He also has another argument for the same conclusion, an appeal to the ‘all things come alike to all’ outlook of the book of Ecclesiastes.  (City of God, 20. 2,3)  Though we have seen Augustine’s move to a view of history as ‘secular’, as not providing in the events of providence further any developments of his saving purposes, which were completed at the Ascension of the Saviour, nonetheless in this era God continues his judgments through providence.  ‘[M]an, sometimes in public, but continually in secret feels the hand of Almighty God punishing him for his transgressions and misdeeds, either in this life or the next.’

Thus in the things where God’s judgments are not to be discovered, His counsel is not to be neglected. We know not why God makes this bad man rich, and that good man poor; why he should have joy, whose deserts we hold worthier of pains, and he pains, whose good life we imagine to merit content; why the judge’s corruption or the falseness of the witnesses should send the innocent away condemned, and the injurious foe should depart revenged, as well as unpunished; why the wicked man should live sound, and the godly lie bedrid; why lusty youths should turn thieves, and those who never did hurt in word be plagued with extremity of sickness; why infants, of good use in the world, should be cut off by untimely death, while they that seem unworthy ever to have been born  attain long and happy life; or why the guilty should be honoured, and the godly oppressed; and such contrast  as these – which who could count, or recount? (City of God, 20. 2)

Augustine’s argument is that neither the incidence of ups nor of downs in life correlates with personal character. God’s judgments are unsearchable, and his ways inscrutable.

Although, then, we see no cause why God should do thus or thus, He is whom is all  wisdom and justice, and no weakness nor rashness, nor injustice, yet here we learn that we should not esteem too highly those goods or misfortunes, which the bad share with the righteous; but should seek the good peculiar to the one, and avoid the evil reserved for the other. (City of God, 20. 2)

In the next chapter he supports this by discussion of Solomon’s reflections in Ecclesiastes. This rule of historical interpretation, to treat the character of human lives as neither evidence for nor as evidence against the blessing of God, severely limits the historical judgments that observers may make as to the blessing or judgment of God, and makes the construction of a  theological commentary of the period an impossibility. Nevertheless the apparent randomness of the happenings has lessons for those that have eyes to see.