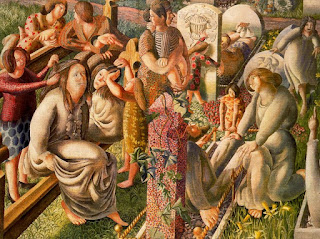 It is not generally appreciated, I think, that the Puritans in general adopted Thomas Aquinas’s view (taken from Aristotle) that the soul is the form of the body; as such, the soul invests the body with vegetative, sensory and intellectual powers. A human being is a rational animal, therefore.  And having a rational soul, mankind are made in the image of God, unlike wasps and sheep. Man is not a soul that has a body, as modern followers of the Puritans tend to think, perhaps unwittingly following Descartes - or Plato - at this point. Rather, his soul infuses his body with life.

What's the difference? The vital difference is that for the Puritans the body was essential to the person. But what, you say, of the death of the body and the interval between death and resurrection? Well, the answer they give is a good example of the scholastics adaptation of  Aristotle in the interests of preserving Christian doctrine. Aristotle, of course, did not have a doctrine of the resurrection body. But Thomas Aquinas adapted Aristotle in thinking in terms of two essential incomplete substances, each matched to the other. So at death the human being loses an essential part, only to gain it again in the provision of the ‘spiritual body’ of I Corinthians 15. In this the body and soul are not accidentally united, but essentially so, though prised apart at death.  In the meantime, in the 'interval' between death and resurrection, the person is incomplete, an incomplete essential part. As Peter Geach put it, at death what survives is a ‘mental remnant’ of the person who died. At resurrection the lost essential substance, the body, is, by the power and goodness of God, regained by the soul. The human being is once again complete.

The Dutch Reformed Scholastic Gisbertus Voetius (1589-1656) worked this out in Thomistic terms, following him faithfully. Gisbertus Voetius drew from Aquinas, that the soul and body are incomplete substances which together form a substantial unity, the human being.…..and I believe the Puritan John Flavel thought like this, too, but adopted his language to the needs of his congregation and to their pastoral care. So here he is saying much the same as Voetius, but expressed in his quaint way to their needs.

We can not trace the way of the Spirit, or tell in what manner it was united with this clod of Earth. But it is enough that he who formed it, did also unite or marry it to the Body. This is clear, it came not by way of natural resultancy from the Body, but by way of inspiration from the Lord; not from the warm bosom of the Matter, but from the breath of its Maker.

The allusion is to Genesis 2.7

And here are other expressions of the same thing -

O the Soul and Body are strongly twisted and knit together in dear bands of intimate Union and Affection, and these Bands cannot be broken without much struggling: O ‘tis a hard thing for the Soul to bid the Body farewell, ‘tis a bitter parting, a doleful separation: Nothing is heard in that hour but the  most deep and emphatical Groans; I say, emphatical groans, the deep sense and meaning of which, the living are but little acquainted with…

Its desire of Re-union continuing still with it in its state of Separation,  speaks its love to the Body. As the soul parted with it in grief and sorrow, so it still retains even in glory an inclination to re-union, and waits for a day of re-espousals….The union of Soul and Body is natural, their separation is not. Pneumatologia, a Treatise of the Soul of Man, published posthumously (2nd edn London, Printed by J.D. for Tho. Parkhust, 1698).

The point is that death is not simply the loss of the body, but it is unnatural, leaving gaping incompleteness in the life of the remaining soul. The disembodied soul is unnatural, incomplete at a fundamental level. And the resurrection is not simply an enjoyment of a heavenly body, but the return of my body to its natural situation, as the body working through this particular soul, this body  now in a glorified and Spirit-filled state.

Consider another Puritan passage. The author is writing of the way in which the soul, a spiritual entity, energises and animates the entire body

[A]s are all the actings and energies of the senses, and of the locomotive faculty, as also what belongs to the receiving and improving of nutriment. These are acts of life as life inseparable from it; and their end is, to preserve the union of the whole [the union of body and soul] between the quickening and quickened principles.  (2) There are such acts of life as proceed from the especial nature of this quickening principle. Such are all the elicit and imperate acts of our understandings and will; all acts that are voluntary, rational,  and peculiarly human.

There are some expressions of life emanating from the soul that are reflex and automatic, to do with eating, walking and growing, for example, which do not arise from particular volitions. But these are equally movings of the soul as are reasoning, making plans to do things, and doing them. These are expressions of ourselves that are brought about in a characteristically human way, by the operations of the understanding and the will.

And what of death? Death is or involves the separation of the soul from the body. The infusing of the body for all that it does, the whole range of actions, ceases. For it is a principle of such life only insofar as  it is united to the body.

As a consequence of these [ceasings], there is in the body an impotency for and an inaptitude unto all vital operations. Not only do all operations of life actually cease, but the body is no more able to effect them. There remains in it, indeed, “potentia obedientialis,” a “passive power” to receive life again, if communicated unto it by an external efficient cause.

He cites the resurrection of Lazarus as a case in point.

Who is this?  Certainly not a country parson. But John Owen, of course.

Owen is sometimes impatient with scholasticism, but here we see him (as an illustrative aside in his exposition of regeneration), in full cry as an unabashed scholastic, endorsing a central feature of scholastic anthropology. (Works, III 284-5)

We don’t think like that any more, like both Flavel and Owen did. The modern person who is ‘a follower of the Puritans’ (as we say)  follows them only selectively. Generalising, we think the body is one thing, and the soul another. And they are linked to form a unity, being detached at death and reattached at resurrection. So ‘I have a soul that can never die’ (as the Child’s Catechism teaches) and a body that can die, and will, for a time linked accidentally to the soul.  The typical ‘Puritan’ (the word can be used in various ways, of course), as we have seen, taught that a person is  more of a unity than this, and at death he or she is  fractured, becoming disabled and bereft in soul by the death of the body. As the bereft soul awaits the resurrection there are fewer things that it can do than it once did.

By contrast, modern Puritan-followers if they think at all of the relation between body and soul, attribute less and less to the soul, and more and more to the body , including its brain, a kind of super-computer. The 'soul' has become a deep-down 'inner' self, a person's religious centre,  which bears a person's eternal destiny, for good or ill. The body is everything else about a person, including especially his brain and nervous system. I'm inclined to think that both Johns, Flavel and Owen, would silently shake their heads at this reconfiguration of the ancient position.  But at present, of course. neither has a head to shake.