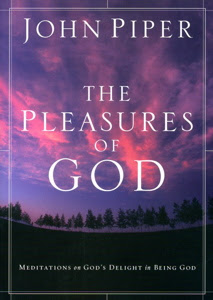 John Piper: The Pleasures of God

Hedonism of whatever kind implies a calculus. In the case of John Stuart Mill’s utilitarianism, the calculus is in terms of utility or satisfaction or pleasure, a ‘felicific calculus’ as his disciple Jeremy Bentham called it. Bentham worked out this idea in some detail. So we may ask, how does one calculate Christian hedonism? What are the units of satisfaction? How do we decide when we have enjoyed fewer or more of these? Are there different qualities of such units, some ‘higher’ than others? It is easy to see that such questions are not easy to answer. But if we cannot answer them satisfactorily, Christian hedonism falls at the first fence, along with its non-Christian cousins.

Naturally enough, hedonism of whatever kind brings pleasure or satisfaction to the front of a person’s mind. Pleasurable states of affairs are identified, and those states of affairs which are judged to produce the greatest amounts of satisfaction are sought, however these amounts are to be calculated. A person may be absorbed in his hobby, restoring a classic Mini to its original state. He seeks out parts on eBay and in boot sales; he trades them with other collectors, he works at the car, at its electrics, its various fittings, and so on. Is that person getting pleasure out of what he is doing? Of course he is. But the pleasure is not the first thing; the first thing is restoring the car, and the pleasure piggy-backs on the activities that this involves, the skills that have to be learned, the problems that have to be solved, the sight of the restored car taking shape. The pleasure is not some separately identifiable state, but a bye-product of the activity. And of course as there are many different kinds of activities, there are many different kinds of pleasure.

This reminds us that a pleasure, in the hedonists sense, is not a sensation, like that provided by a painful toe, or a cool drink. There is an ‘aboutness’ to the experience of hedonistic pleasure. It is a reaction to beliefs and desires that one has, activities that one engages in to secure certain ends, or the unsought things that happen to a person, and so on. If I weep because I’m peeling the onions, I do not weep about the onions or about my eyes. But if the optician tells me that I shall never see again, then I might weep about my eyes. But the peeler’s crying over the onions is not like that; there is no aboutness about it, but a purely physical reaction. The joy that came to Jesus’s disciples from knowing that their names were written in heaven is a different kind of joy from that of having won £161 million on the Lottery, or of having become a parent, and so on and on.

The basic problem here is distraction. For the consistent and serious-minded hedonist no activity is ever performed for its own sake but for its yield of happiness or satisfaction. In an extreme form, as every beginning student of Mill’s utilitarianism quickly realizes, the problem is that in an effort to be a consistent hedonist such hedonism becomes impractical. A calculation has to be performed before any action is done. This requires a quick calculation to see whether we are more satisfied in doing A than B, and whether A rather than B is more likely to be achieved, In the case of Christian hedonism, this is a consequence of the belief that God’s glory is to be sought not because it is a good in itself, the supreme good, but because of what, according to the mantra, its precondition is, the greatest possible degree of satisfaction in God.

It may be argued that the famous answer to the question about the chief end of man that is found in the Westminster Shorter Catechism supports Christian hedonism in its reference to enjoying God forever. Certainly the hedonic element is present. But the structure of the answer is rather different from that of Christian hedonism. The chief end of man does not refer to the gain in satisfaction that each of our actions may provide as we perform them, but it has a distinctive eschatological strand to it. The chief end of man (here and now) is to glorify God and (at the last, when experiencing the vision of God) to enjoy him for ever. Here and now human life is to be dominated by glorifying God by what we think and do and feel, and endure, whatever the pain. Then, the Christian’s pilgrimage over, the faithful Christian will enjoy God when he shall be like him, seeing him as he is.

It seems that Christian hedonism takes these two elements, the present Christian life and the life to come, and collapses them together. It proposes to integrate the enjoyment of God into our present life as a vital ingredient in every Christian action, and the motive for each of them. But the Catechism simply refers to glorifying God, leaving open the degree of self-awareness and calculation that ought to be present in a Christian’s action.

And of course such glorifying of God is the ‘chief end’, not the only end. It provides a place not only subordinating what we do to God’s glory, but also for enjoyment, including the enjoyment of creaturely gifts for their own sake. The Catechism makes room for the hobby of growing insectivorous plants, or of collecting old opera programmes. This is a vital feature of Christian morality, according to which there are actions that are commanded, and actions that are forbidden, and ‘indifferent’ actions, neither commanded or forbidden. ‘Indifferent’ actions provide the space that Christian liberty occupies, and it ought to be jealously guarded now, as at the Reformation. Systems of Christian morality ought not to add to the commandments or prohibitions of God. The trouble with hedonisms, Christian and other, if they're taken seriously, is that they confine us to a moral or spiritual treadmill from which is not easy to escape.

What we are discussing, using and enjoying, is an aspect of the distinction that caused Augustine so much trouble. (For some details, and a comparison of Augustine and Calvin at this point, See Paul Helm, Calvin at the Centre, 29-31). One problem that exercised Augustine was: may created things be enjoyed for their own sake? May I have friends? Or may God alone be enjoyed for his own sake, and are all other creaturely enjoyments to be thought of only as obstacles to the enjoyment of God for himself?

All this affects the idea of self-examination. There is no denying that self-examination was central to the piety and personal religion of Puritanism. They took seriously the New Testament teaching that a person should examine himself (2 Cor. 13:5), take heed (1 Cor. 10:12), judge himself (1 Cor. 11:31), abase himself before God (Luke 18:14), and be watchful (Matt. 25:13), as well as the self-knowledge depicted in its various phases in the Psalms. This is an integral part of Reformed religion, and cannot airily be dismissed as ‘pietism’. (If you doubt this, glance at Q.171 of the Larger Catechism.) And most certainly this present critique of Christian hedonism is not undertaken in order to support an outlook which is all head and no heart.

Yet self-examination must be undertaken bearing in mind our capacity for self-deception, and so on the basis of as much hard evidence as possible. If we are to examine ourselves to see whether or not we are in the faith, this first and foremost concerns what we believe, the faith we confess. In connection with the Supper, Paul stresses the need for ‘discerning’ the Lord’s body, and for judging, on which he places a repeated emphasis. These activities involve the discipline of the mind, and may result in a ‘worthy’ eating, valuing the Supper at its true worth. It is such matters as these, not how much satisfaction in God am I enjoying, that are the principal activities of self-examination. Right belief, and so a ‘worthy’ observance of the Supper. And likewise with our conduct. The question is, are the commands of God being kept? Is Christian virtue being formed? These require the careful assessment of solid evidence about what we believe and do.

As far as Christian hedonism is concerned, since ‘God is most glorified in us when we are most satisfied in him’, the focus in self-examination as to whether or not we are living for the glory of God must fall on estimating the degree and amount of our satisfaction in God. (‘Satisfaction in God’ seems an odd phrase, by the way.) As we have mentioned more than once in this piece, hedonism involves calculation. Not only does living the Christian life properly involve the discovery of whether or not we are more satisfied in God than in other, creaturely things. It also involves striving to maximise our satisfaction in him. And as we have also already noted, the strong tendency must be to focus on the Christian’s satisfaction in God rather than on her confession of faith in him, and her obedience to him. After all, we must remember that the first question of the Shorter Catechism is followed by the second. In the emphasis of current Christian hedonism, is not the balance and variety of the Christian’s life which the New Testament sets forth being sacrificed for a neat phrase?