Augustine at 18: The Love of Wisdom 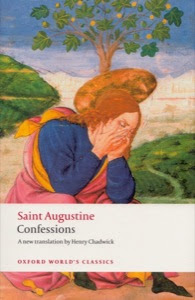 This is the first of three posts on Augustine and pagan philosophy, using his Confessions.

Aged eighteen, Augustine was top of his class, learning rhetoric so that he could function as an advocate in the law. He believed that even at this time, long before his conversion, God was chastening him for his evil. As top dog he noted that he was ‘pleased with myself and was inflated with deceit’, but quieter than the others in the class, who were addicted to acts of vandalism, and known as the Wreckers. To be a Wrecker you have to be wrecked, Augustine drily observed. So what of Augustine himself? ‘I wanted to distinguish myself as an orator for a damnable and conceited purpose, namely delight in human vanity’. (38)

The curriculum led him to Cicero’s book Hortensius, an advocacy and defence of the worthwhileness of philosophy.

Cicero was a Stoic, perhaps best known today for his work The Nature of the Gods, an imagined conversation between men with different religious points of view. The book provides a good window into the religion and theology of the ancient world. In later life Augustine came to have an ambivalent attitude to Cicero, and to Stoicism more generally. Among other books Cicero wrote is On Divination, in which rather than believe that the future could be foretold by divination he preferred to think that any foreknowledge was impossible. This is certainly a strange view to hold in anyone who is a Stoic, and Augustine wonders out loud how much of a Stoic he actually was. He exploded: ‘to acknowledge a God, and yet to deny that [he has foreknowledge of things to come], is monstrous madness”, which he observing, went about to provide even that which ‘the fool hath said in his heart; there is no God’. (City of God, V.IX) The entire discussion is worth reading.

One of the great benefactions of Augustine to Christian posterity was the provision of a sort of league table of philosophers. Top of the table was Plato and the Platonists (who we shall meet later on), and following them the Stoics. As we can see, any denial of God’s foreknowledge from them, or from those who are sympathetic to them, called forth his condemnation. Their teaching on fate, as well. He did not sympathise with their view of emotion and its expression, citing the emotions of Jesus as refutation. But he placed value on their view of nature and the natural, or natural law, which became the foundation of the natural law tradition in the church. So the Stoics were a mixed bag, but they were better than the Sceptics and Epicureans, who were altogether condemned. (One of the first works Augustine wrote after his conversion was a refutation of Scepticism.) What of Aristotle? We shall offer a limited answer to that question later on. But the general problem was that Aristotle was not translated from the Greek, except for a few works, such as The Categories, until the 12th century. We shall meet The Categories in the next post. What this league table shows is a kind of philosophical eclecticsm which has often been the attitude of Christian theologians to philosophy – to pick and choose. There is no revealed Christian philosophy, so why not?

Cicero’s Hortensius is a book that is now lost to us, and all that we know of its contents we only know through Augustine’s citations from it, and summaries of it. It is fair to say that this book, read in the course of his studies, had a transforming effect upon him.

The book changed my feelings. It altered my prayers, Lord, to be towards you yourself. It gave me different values and priorities. Suddenly every vain hope [such as those hopes to be derived from success in rhetoric] became empty to me, and I longed for the immortality of wisdom with an incredible ardour in my heart.

This was, intellectually speaking, the beginning of Augustine’s return to God. He continues -

I began to rise up to return to you. For I did not read the book for a sharpening of my style, which was what I was buying with my mother’s financial support now that I was 18 years old and my father had been dead for two years. I was impressed not by the book’s refining effect on my style and literary expression but by the content. My God, how I burned, how I burned with longing to leave earthly things and fly back to you.

What more does Augustine tell us about the book and its impact? It kindled his love for philosophy, but it did not convert him to one particular philosophy. And even when, later on, we shall see the influence of the Neoplatonists on him, that influence was not total, but selective. If Augustine was a ‘platonist’ he was a very selective one. For what Augustine seems to have liked about the Hortensius was that it helped to form in him the judgment that the truth of God must be acknowledged whatever its source.

But he is even bolder than this. He thinks that what Cicero is doing (unbeknown to him, of course) is providing ‘a clear demonstration of the salutary admonition given by your Spirit through your good and devoted servant, ‘See that none deceives you by philosophy…..’ (Col.2.8-9), even though Cicero was not acquainted with the words of Paul.

The one thing that delighted me in Cicero’s exhortation was the advice ‘not to study one particular sect but to love and seek and pursue and hold fast and strongly embrace wisdom itself, wherever found’. [But….]’One thing alone put a brake on my intense enthusiasm – that the name of Christ was not contained in the book…..Any book which lacked this name, however well written or polish or true, could not entirely grip me’.

This attitude recurs when later on he is influenced by ‘the books of the Platonists’, as we shall see. The philosophers took him so far, but no farther. As in Acts 17 Paul could quote from the pagan writers ‘In him we live and move and have our being’ and ‘We are his offspring’, for these sentences express the truth of God. But those writers had nothing to say about the coming of the Saviour, about Incarnation and Crucifixion and coming judgement.

One might think from these last words that, helped by Cicero, Augustine would return at once to the Catholic Church. But not a bit of it. When he turned to the Scripture, due to his ‘inflated conceit’ he found it to be a disappointment. The bald style of the Bible with its was ‘unworthy in comparison with the dignity of Cicero’. So what happened? He ‘fell in with men proud of their slick talk, very earthly-minded and loquacious. In their mouths were the devil’s traps and a birdlime compounded of a mixture of the syllables of your name, and that of the Lord Jesus Christ, and that of the Paraclete, the Comforter, the Holy Spirit. These names were never absent form their lips, but it was no more than sound and noise with their tongue’.

He is referring to the Manichees, using the language of hindsight, naturally. It took quite a while for them to lose their appeal. And when eventually he was pulled free, and sought to return to the Faith of his mother Monica, he found more help from pagan philosophers.