Of Faith and Reason: Locke and Edwards 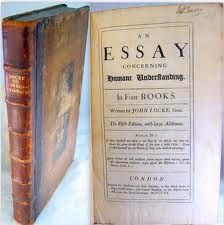 In the last post on Edwards I attempted to show that he depended on Locke’s unitary account of the human self and of passion in his Essay Concerning Human Understanding for his account of the nature of passions/affections and their connection with the will. This is a fact which, if it has been noticed before, hasn’t been stressed. In this second post on Lockean influences on the Affections I shall brieflylook at the influence of Locke’s chapter ‘Of Faith and Reason, and their Distinct Provinces’ on Edwards’s discussion of the affections. Then, next time, there's a discussion of the relation between Locke’s chapter ‘Of Enthusiasm’ and theReligious Affections, particularly Part II, ‘Shewing What Are No Certain Signs That Religious Affections Are Truly Gracious, or That They Are Not’. In all these matters we shall find Edwards to be a respectful and faithful, though not a slavish, follower of Locke


The two chapters which now concern us, are towards the end of Book IV, where Locke is discussing reason: a chapter (XVIII) ‘Of Reason’, followed by the chapters on faith and reason, (XIX) and then one on enthusiasm (XX), added in later editions of the work. We shall discuss the provenance of the last of these chapters next time.


Locke’s aim in the chapter on faith and reason is to subordinate faith, and particularly any appeal to divine revelation, to the judgment of reason. The guidance of reason, and the guidance of faith, form ‘two distinct provinces’. Reason has to do with establishing the certainty or probability of propositions deduced from our ideas. Faith, that is, true religious faith, is reliance upon propositions upon testimony to such and such as the word of God, coming to us in some extraordinary way.


What I shall try to do, briefly, is this. First, to identify Locke’s main arguments in the chapter. And then to argue that, by and large, Edwards accepted these arguments and organized hisAffections within their parameters, even though the surface appearance may be the exact opposite of this. Whether or not he was successful in carrying out this part of his project is not our main concern. Obviously, he thought that he was successful.


In his two chapters, on faith and reason, and then on enthusiasm, Locke was principally arguing against the left-wing sects of the commonwealth and post-commonwealth period who claimed immediate revelation and inspiration. [For shorthand, I shall use the terms ‘quaker’ and ‘quakerish’ to cover these sects, though the Quakers then had a rather different character from the Quakers now.] In earlier posts we have seen that Edwards had a political motive in writing on revival, particularly writing the Religious Affections: to capture the centre ground, stressing affection, and so denying those who denied its importance in religion, but also arguing forcefully against undue prominence being given to the ‘phenonema’ of the revivials.

In arguing against quakerish religion Locke also had a (much grander) political ambition, to draw the boundaries of religious toleration in post-Commonwealth England against the unpredictability of the enthusaists on the one hand, and Roman Catholics whose prime loyalty was to Rome and who would like nothing better than the overthrow of the English protestant establishment. Locke’s chief point against quakerish enthusaism is that reason has a place in the Christian religion and that an account of religion operates discursively, that is, by the consideration of the arguments and the evidence that people offer in making religious claims. The trouble with the sectaries was, in a nutshell, that they claimed to hear the voice of God, but they had no arguments, whereas there are arguments for accepting a divine revelation from God, as mainstream Christians do. To use Thomas Hobbes’s example, it was impossible for the quakers to distinguish ‘I met God in a dream’ from ‘I dreamed that I met God.’


Naturally enough, Locke starts his discussion of faith and reason from the conclusions of the previous chapter, ‘Of Reason’. There he established that it is the task of reason to provide certainties (where possible), and probabilities where not, arising from our ideas, that is, from the evidence of our five senses, our generalisation from them, together with the testimony of others. So any candidate for a revelation must be considered by reason in this sense, and any revelation cannot be more certain than the probabilities. Though we might suppose that a revelation could include evidence of what we can discover by our deductive or inductive reasoning, its testimony to these things will not be more certain than our independent evidence for them. So we might conclude from the New Testament that there is a Sea of Galilee, but we shall be more certain that there was by the direct evidence of our senses and those of others than by consulting the Bible. (This is my example. Locke uses the example of Euclidian geometry: he says ‘whatsoever truth we come to the clear discovery of, from the knowledge and contemplation of our own ideas, will always be certainer to us than those which are conveyed to us by traditional revelation’. (282) He also discusses the Flood.) ‘Probability’ here includes very great probability. This calls to mind what B.B. Warfield has to say in his paper ‘The Real Problem of Inspiration’, writing about the trustworthiness of Christ and his apostles as teachers of doctrine.

Of course, this evidence is not in the strict logical sense “demonstrative;” it is “probable” evidence. It therefore leaves open the metaphysical possibility of its being mistaken. But it may be contended that it is about as great in amount and weight as “probable’ evidence can be made, and that the strength of conviction which it is adapted to produce may be and should be practically equal to that produced by demonstration itself. (Revelation and Inspiration, 218)

Locke is not a sceptic about revelation. He sets out the distinction between faith and reason not to disparage the possibility of divine revelation.

But…there being many things wherein we have very imperfect notions, or none at all; and other things, of shoe past, present, or future existence, by the natural use of our faculties, we can have no knowledge at all: these, as being beyond the discovery of our natural faculties and above reason, are, when revealed, the proper matter of faith. Thus, that part of the angels rebelled against GOD and thereby lost their first happy state, and that the dead shall rise and live again; these and the like, being beyond the discovery of reason, are purely matters of faith, with which reason has, directly, nothing to do. (287)

Reason must judge that there is a revelation, and that revelation may deliver to us matters which are above reason. However, whatever God immediately reveals in of the highest certainty. (283)

Though faith be founded on the testimony of God (who cannot lie) revealing any proposition to us: yet we cannot have an assurance of the truth of its being a divine revelation greater than our own knowledge: since the whole strength of the certainty depends upon our knowledge that GOD revealed it; which, in this case, where the proposition supposed revealed contradict our knowledge or reason, will always have this objection handing to it (viz.) that we cannot tell how it conceive that to come from GOD, the bountiful Author of our being, which, if received for true, must overturn all the principles of knowledge he has given us; render all our faculties useless; wholly destroy the most excellent part of his workmanship, our understandings; and put a man in a condition wherein he will have less light, less conduct than the beast that perisheth. (284) [Locke is not overly fond of full stops. Still, his meaning is clear.]

The substance of faith/revelation reveals what falls outside the normal boundaries of human knowledge, but a necessary condition of receiving it is that we have good reason to do so.

In the main, Edwards is in agreement with this approach. [He lived before the days when some people who adher to the Reformed faith were captivated by ‘presuppositionalism’ in one or another of its varieties]. This can be seen at length in his Miscellanies (e.g. Misc. 1340). For an exposition of this aspect of Edwards’s theology see John Gerstner, The Rational Biblical Theology of Jonathan Edwards, (Berea Publications, 1991) Vol. I. Chs. 5 and 7.

The same approach is present in the text of Religious Affections. There are a number of appeals to reason. He claims that neither reason nor revelation rule out the idea that when God manifests his power in the soul, a power different from all natural powers, he makes in evident that this is his work. (139) He appeals to ‘philosophers’ in giving his account of judgment or taste, of which spiritual judgment is a species.(283) A person may, by a judgment of this kind, be assured ‘of the divinity of the things of the gospel’. This is a ‘reasonable conviction’. In the case of such intuitive knowledge, ‘the argument is but one; [that is, it involves one inference] and the evidence direct; the mind ascends to the truth of the gospel but by one step, and that is its divine glory’. ‘We can’t rationally doubt, but that things that are divine, that appertain to the supreme Being, are vastly different from things that are humane….it would therefore be very unreasonable to deny that it is possible for God….’ (298-9) He appeals to the ‘nature and reason of things’. (323) Reason teaches what Scripture teaches. (409 f.) ‘Reason plainly shews’ that what a person prefers ‘when left to follow their own choice and inclinations, are the proper trial what they do really refer in their hearts’. (426-7) A distinction between experience and practice ‘is not only an unreasonable, but an unscriptural distinction’. (450-1)


What do these appeals to reason and what is reasonable establish? We shall try to answer that question next time, when we look at Locke on enthusiasm and the Affections reveals itself as a project that sits within Lockean parameters.
Posted by Paul Helm at 6:54 AM