An Elbow in the Kingdom 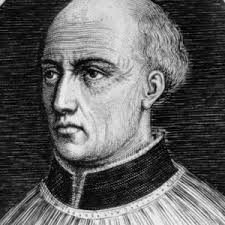 The news that Thomas à Becket’s elbow – a Roman Catholic relic – has arrived in the UK from Hungary set me thinking about the Two Kingdoms again.

This fragment of à Becket’s remains is one of several remaining bits of the late Archbishop of Canterbury who was assassinated in the reign of Henry VIII, and canonized by the Roman Catholic Church. It is sacred, or holy, and a fit object for adoration in that church. It has now arrived in Canterbury having been in Westminster Cathedral for a few days, on a tour from Hungary, where it is kept. (As far as I know the Hungarian Ambassador has not been summoned to the Foreign Office to receive a demand from HMG for our relics back.)

The Spectator in its ‘Barometer’ column lists several facts about the elbow, among them

It is said to contain a fragment of St Thomas à Becket’s elbow. And if you go to St Thomas Canterbury Catholic Church, Burgate, Canterbury, there you can see  fragments bone and finger in a glass case above the altar.  In Rome there are fragments of bone and brain. Apparently bones and a skull were discovered in 1888 but a later study concluded the skull was that of an older man.

The veneration of relics is part of the Roman Catholic practice of praying to the saints.

The cult of Becket was one of the chief casualties of the Reformation; there was the 1538 Proclamation which mentioned, inter alia, that his image was to be ‘put down and avoided out of all churches, chapels and other places’. His name was to be erased from all liturgical books and his office, antiphons and collects were to be said no more, ‘to the intent that his grace’s loving subjects shall be no longer blindly led and abused to commit idolatry’.

All this called to mind of Calvin’s letter to Cardinal Sadoleto, The Necessity of Reforming the Church. Sadoleto had written to the City of Geneva, which Calvin responded to by a letter of his own. And then he produced his famous tract.  In both of these productions he refers in scathing and amusing terms to the place of relics in the Roman church.

As to the matter of relics it is almost incredible how impudently the world has been cheated. I can mention three relics of our Saviour’s circumcision; likewise fourteen nails which are exhibited for the three by which he was fixed to the cross; three robes for that seamless one on which the soldiers case lots; two inscriptions that were placed over the cross; three spears by which our Saviour’s side was pierced, and about five sets of linen clothes which  wrapt his body in the tomb. Besides, they show all the articles used at the institution of the Lord’s Supper, and an infinite number of similar impositions. There is no saint of any celebrity of which two or three bodies are not in existence. I can name the place where a piece of pumice  stone was long held in high veneration as the skull of Peter.

Whatever the theology behind the place of relics, their multiplication has one proximate cause: demand and supply. The supply was a sure generator of wealth, hence the supply, the ridiculous over- supply.

While we may now smile at this trade, the oppressive regime of Saints Days and Holy Days in late medievalism was not such a laughing matter. A Saint’s Day then was not like a Saint’s day today, or a Bank Holiday. Or even the celebration of Christmas and Easter, which insofar as they retain a religious caste have to do with re-enacting these events, not recognizing the importance of the fact that they are ‘accomplished’, non-repeatable and intrinsically so.  The One Kingdom view holds that the medieval  church in which state and church were intertwined or colluded in the government of the laity by producing a culture that had totalitarian features.

Resistance to the ecclesiastical claims of Rome undermined the divine right to add the requirements of Saints Days and Holy Days and such like, making observance of them an intrinsic duty of the Christian life.  One of the things that  news items of such relics, elbows, shrouds or pumice stone, is to value the clearer view of the distinctness of state and church that reformers such as Calvin arrived at, and how that view has prevailed and indeed been secularised in the modern world.

Freedom is not simply the freedom to do what I want to do, as the modern libertarian doctrine has it. Libertarianism is potentially oppressive if large numbers of people want the same things, as we are seeing. The almost inevitable effect of the enjoyment of freedom is to restrict opportunities for the expression of views other than one's own that we find disturbing.  When John Stuart Mill wrote his Liberty, arguing for toleration against the ‘tyranny of the majority’ he, like other writers such as Matthew Arnold, had the evangelical culture of their day in mind, the ‘Philistines’. They had a point. Not only absolute monarchs or modern dictators are capable of being tyrannical. It can come through a kind of cultural hegemony making the expression of different points of view socially forbidden via the ‘social media’ as well as other less ‘social’ kinds of media. Christian groups like the Christian Institute and others do well to ally with comedians and all else to uphold freedom of expression. Now living as a distinct minority, the Christians, in what was once termed ‘Christian England’ will inevitably make us increasingly aware of the reduction of the opportunities in which Christians can give pubic expression to their faith, or even to be seen to hold the faith.
.
The current focus on the Two Kingdoms has been on secular society and the fact that it is distinct from the church. That’s freedom, we rightly think, to be free from such things as the obligation to transform culture in the name of Christ. But actually it is only one side of freedom. Christian freedom has not only to do what we are commanded to do or to abstain from doing by the government of the day, but also from what some church or sect, or social group or cultural mood, may try to require of us, or do require of us, that would be sinful. Not permitted by the Word of God, but forbidden by it.