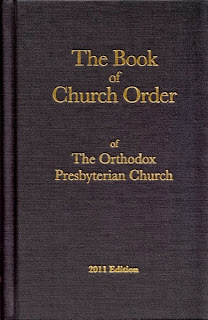 There’s not much more to be said about this, I fancy. Carl thinks that I do not understand the Presbyterian system. Maybe not. There are books of Church Order to be read, the contents of which are mastered by the lawyer-types of the church, and I confess that I do not find these a very satisfying genre. But besides this, I know without looking, that presbyterianism, like any such human system, leaks all the way. It leaks through nods and winks, through unattributable comments, through what is said and what is not said. Human society cannot be otherwise. We all know of poor people who have to protest their innocence all the way up, in courts of law and in Christian denominations, and that have been ruined by the attendant exposure, quite apart from the weeks and months of strain while documents are prepared and friendly counsel advised and the day of judgement awaited…. I say, in such circumstances thank God for religious consumerism. At least the aggrieved party can walk away, find another place of worship, and still earn a living.

I fancy that Carl goes on about this because he suffers from a sort of presbyterian perfectionism. Call it Bannerman’s Disease. A cynic might say that he has the zeal of a convert. When he bids us all to think with him of the church of Christ as a remnant, as living its life as if in exile, I’m with him all the way. And as I said in the post, I agree with critiques of the Big Men such as his. But not with the cure-all of Presbyterianism. The Black Book does not solve the bugbear of accountability. And the point is, if there’s nothing better in the Church of Christ that presbyterianism, let’s at least acknowledge its flaws. Carl recognizes the imperfections of the human natures of those that thumb the Black Book, and this is welcome. And this was my point. A perfect system administered by those with imperfections is de facto imperfect. Spurgeon famously said (from memory) ‘For me “lead me not into temptation” means “keep me off the committee”’.

Carl’s second and third points seem to merge together. His notes that the Mighty Men are implacable. They won’t have anything to do with him. He can’t get through to them. They cannot discern that they have become objects of adulation. They refuse to catch his ball and tell him so (all of which is sad). And as it takes at least two to have a debate the result is stalemate and not as Carl had hoped, checkmate.  No doubt the Mighty Men have feet of clay. No doubt they behave as we wouldn’t behave in their circumstances. From where I am they seem a rather disparate crew, men of different times-in-life, families, temperaments, careers, degrees of intelligence, sagacity, theological savvy, and no doubt personal religion. Yet some of them have been a distinct help to people I know, and to me. I presume (maybe rashly) that they have thought about things as they send emails to Carl. They have made judgments about their churches as ‘normative aspirational models’ and the rest.  And about the usefulness of otherwise of engaging in a public debate about themselves, and what others think of them. And overall they have judged (or are judging) that the benefits of staying as they are outweigh the costs of a flight to presbyterian order. And I say, if Paul rejoiced when Christ was spoken of in jest, in argument, and with contempt (though this was not exactly an ideal state of affairs), then we ought to be able to rejoice in the Mighty Men’s opportunity to communicate the gospel to hundreds and thousands.

So, I say, don’t forget Paul. Here's a bit more of him. (No doubt I’ll be told by some that I’m taking Paul out of context, or even, heaven forfend, of ‘proof-texting’):

‘Therefore, do not pronounce judgment before the time, before the Lord comes, who will bring to light the things hidden in darkness and will disclose the purposes of the heart. Then each one will receive his commendation from God’; and ‘Who are you pass judgement on the servant of another? It is before his own master that he stands or falls. And he will be upheld, for the Lord is able to make him stand’; and ‘Only that, in every way, whether in pretence or in truth, Christ is proclaimed, and in that I rejoice.’; and finally, ‘For though I am free from all, I have made myself a servant to all, that I might win more of them. To the Jews I became as a Jew, in order to win Jews.  To those under the law I became as one under the law (though not being myself under the law) that I might win those under the law….I do it all for the sake of the gospel, that I may share with them in its blessings’.

Relevant? Worth keeping in mind?

In human affairs, when we cannot get our own way, even if we are convinced that that way is God’s way, I suggest that the better course is not to keep banging on about it, but to turn one’s energies and talents in another direction.  Carl's postcard from Palookaville rather confirms me in this view.