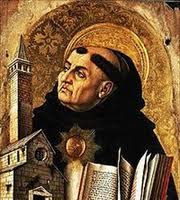 This is the second of three posts dealing with topics that are important in Reformed theology that were already carefully dealt with in the medieval era. In the last post we looked at Anselm’s perfect being theology, its rootedness in Scripture, and its elaboration in his Proslogion. So when later on we find John Owen elaborating his defence of orthodoxy against Socinianism in his great work Vindiciae Evangelicae by referring to God as a perfect being, he is consciously or otherwise tapping into this medieval view that God is a being than which a greater cannot be conceived.

In this post we shall briefly consider two places where Thomas discusses predestination:First, Summa Theologiae 1.23. ( See Summa Theologiae, Volume 2, The Mind and Power of God , (Part One: Questions 14-26) General Editor, Thomas Gilby (Garden City, New York, Image Books, 1969). Ia 23.2, 164. And then Article 6 of his De Veritate. Translated by Robert Mulligan in Thomas Aquinas: Providence and Predestination, (Chicago, Henry Regnery, 1953). All page references are to this edition)

Unlike the standard Reformed layouts, the Summa Theologiae does have a distinct locuson the divine decree or decrees. This is an historical accident due to the fact that the decrees became a hot potato in the Arminian controversy, and for that reason were often discussed in great detail, and thought worthy of a place of their own. Thomas deals with predestination and reprobation as part of the doctrine of God, of the will of God. So we should not make a big deal of this.

In any case the treatment of the topic in the Summa is very similar to that in De Veritate. Thomas's thought is governed by two ideas. The first is that predestination is an eternal act, and the second is that it has those temporal effects that are intended by God, who ‘plans' and 'sends' predestination, in rather the way in which an archer sends an arrow. In these respects predestination is an aspect of providence. Although in the final edition of the Institutes (1559) Calvin put predestination in a separate place from his treatment of providence, it’s clear when you read him on providence that the two are intertwined in his thinking. Here is Thomas:

Clearly predestination is like the plan, existing in God's mind, for the ordering of some persons to salvation. The carrying out of this is passively as it were in the persons predestined, though actively in God. When considered executively in this way, predestination is spoken of as a 'calling' and a 'glorifying', thus St. Paul says,Whom he predestinated, them also he called and glorified'. (164)

Election and predestination are interrelated. What is a predestinating act for God becomes an effective or effectual call in the one predestined. Note Thomas’s use of the golden chain of Romans 8. The following extract summarizes the overall position.

By its very meaning predestination presupposes election, and election chosen loving. The reason for this is that predestination, as we have said, is part of Providence, which is like prudence, as we have noticed, and is the plan existing in the mind of the one who rules things for a purpose. Things are so ordained only in virtue of a preceding intention for that end. The predestination of some to salvation means that God wills their salvation. This is where special and chosen loving come in. Special, because God wills this blessing of eternal salvation to some, for, as we have seen, loving is willing a person good, chosen loving because he wills this to some and not to others, for, as we have seen, some he rejects. (168)

Notice the concise yet clear way in which Thomas writes, and his appeal to Scripture. (I once had a graduate student from Ulster whose mind had evidently been poisoned against Thomas. I required her to read some Aquinas, and when I next talked to her she expressed her shock: ‘He quotes the Scripture!')

Thomas also provides a full and clear account of reprobation.

The causality of reprobation differs from that of predestination. Predestination is the cause both of what the predestined expect in the future life, namely glory, and of what they receive in the present, namely grace. Reprobation does not cause what there is in the present, namely moral fault, though that is why we are left without God. And it is the cause why we shall meet our deserts in the future, namely eternal punishment. The fault starts from the free decision of the one who abandons grace and is rejected, so bringing the prophecy to pass, Your loss is from yourself, O Israel. [Hosea 13.9] (167)

Here is the vital nuance, later picked up and emphasized by the Reformed. Note the similar asymmetry in the Westminster Confession

The rest of mankind God was pleased, according to the unsearchable counsel of His own will, whereby He extends or withholds mercy, as He pleases, for the glory of His sovereign power over His creatures, to pass by; and to ordain them to dishonor and wrath for their sin, to the praised of His glorious justice.

Where did the divines get this nuance from? It can be traced back to Aquinas, (and no doubt further)

Reprobation is significantly different from predestination, though each issues from an eternal decree. God does not cause people to sin because they are reprobated. God passes them by, and they are ‘ordained to dishonour’ on account of their sin. Even if predestination were granted in accordance with the foreseen merit in the ones predestined, (Providence and Predestination, 144) (which it according to Thomas it isn’t), such merits are themselves the product of divine predestinating grace. So predestination is not on account of any merits foreseen, but they are the cause of it only in the sense that they are part of the ordained divine sequence which begins in the calling of men and women and ends in their glorification.

The fact that God wishes to give grace and glory is due simply to His generosity. The reason for His willing these things that arise simply from His generosity is the overflowing love of His will for His end-object, in which the perfection of His goodness is found. The cause of predestination, therefore, is nothing other than God’s goodness. (Providence and Predestination, 116)

And so what about the place of free will?

God does not act on the will in the manner of one necessitating; for He does not force the will but merely moves it, without taking away its own proper mode, which consists in being free with respect to opposites. Consequently, even though nothing can resist the divine will, our will, like everything else, carries out the divine will according to its own proper mode. Indeed, the divine will has given things their mode of being in order that His will be fulfilled. Therefore, some things fulfill the divine will necessarily, other things, contingently; but that which God wills always takes place.

As it came to be expressed, in the carrying out of the decree God acts in accordance with the ‘mode’ of the will; he does not bypass it, or coerce it. To coerce the will is to abuse it. If the sailors have to abandon the cargo in order to save the ship, they do this under constraint, their will acts imperfectly. They’d rather not. If a person is physically coerced, thrown to the floor say, his will is totally ignored. Notice, however, the strength of what Thomas says: we have our wills as they are so that the divine decree can be carried out as God wills it. Some things are necessary, like the man being thrown to the floor; other things are contingent, like David’s sinning with Bathsheba. (Compare the Confession again at this point (‘nor is the liberty or contingency of second causes taken away, but rather established’). In Thomas the contingency in question is the contingency of choice. Whether it is that in the Confession is another question; as it relates to 'liberty' is another question still.