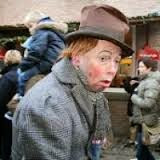 It’s hard to dissent from people - a growing number, so it seems - who write critically about evangelical Mega-stardom, para-church  organisations, and their various frailties. (Those of us who are more aged remember similar critiques of the Bill Graham Organisation in the 1950's and 60's.) Not much neo-Marxist social analysis is needed to follow the money, and to spot how the Top Men expect to be treated, and are treated. But there are difficulties and loose ends in the case that the critics make, and sometimes they adopt an unfortunate posture without realizing it. By now there is a repetitiveness  – I was going to say ‘shrillness’ - that invariably afflicts a ‘debate’, when in fact no debate takes place, because the critics fail to engage the other party. There may even be the danger of motes and beams. Here I note two or three such loose ends.
There are charges against the prominence of unaccountable church leaders, the Mighty Men of the Mega-churches, their self-importance, their egotism, the proneness to plagiarism in their writings, or if not plagiarism then a taste for the I-word which may leave the critics themselves in an exposed position. The ego is pops up in the most unexpected places. Who can know it?

Staring up from the bottom of the mug at  those who level such charges is Juvenal’s usually unanswered question, Quis custodiet ipsos custodes? Who guards the guards?  The critics may have an answer to the tu quoque: we are guarded by the churches in which they serve, and these churches are fitted out with structures,  procedures. Implying that the Masters of the Mega-structures have no guards. Which seems not to be strictly true. For often ‘the disciplines of the market’ and the dangers of bad publicity have a restraining if not a cleansing effect. The restraint may often be of the common variety. And of course a Master-of-Mega has his Christian conscience.

What are the proffered structures that the Masters lack? Chiefly, it appears, they are ecclesiastical. There’s congregationalism, and then there’s presbyterianism. What do these ecclesiastical structures have to offer? We know how precipitate, how impatient, and at the other extreme, how supine congregational government can be, when in accountability mode. This applies even where congregationalists have borrowed from presbyterianism the idea of eldership, which has all the advantages of government by a politburo.

And presbyterianism? To say that presbyterians are ‘fond’ of structures is an exaggeration, I suppose. Yet  procedures can be protracted, as the disciplinary ‘case’ moves ever upwards from the local congregation to the presbytery to the appeal to a general assembly. The custodians are slow in getting their custodial arrangements going. This long-windedness has the effect of transmuting justice delayed into justice denied. For if X is charged with O, then that person immediately comes to be under congregational suspicion regarding O. The glances, the whispers. No smoke without fire. The presumption of innocence until proven guilty becomes, somewhere down the procedural line, the presumption of guilt until innocence is declared. Even the success of a final appeal which delivers a legal innocence may never completely rid the person concerned of the lingering suspicion of guilt. The person’s standing in his congregation is thereafter ruined or severely compromised. Confidentiality? You must be joking! The guards are only human. Perhaps it’s the prospect of such ostracism that led our Saviour to command:

First be reconciled to your brother, and then come and offer your gift. Come to terms quickly  with your accuser while you are  going with him to court, lest your accuser hand you over the judge, and the judge to the guard and you be put in prison. Truly, I say to you, you will never get out until you paid the last penny.

But maybe I’m misapplying the text. Maybe it’s the other way round. The Mega Masters should start the reconciling to their brethren. But things haven’t come to that pass yet, and my hunch is that they are not likely to. For as we noted,  this whole business is a ‘debate’ without debaters,  one hand clapping.

There’s the perennial danger of the pot calling the kettle black.  Or of facing the sharpness of Paul: while you preach against stealing, do you steal?

We see that in order to make a plausible case, the critics of the Mega-church mindset believe and  say that they are not tarred with that mindset themselves. What sort of people are they, the critics? Ordinary pastors, with modest-sized congregations, teaching the word of God faithfully. Their message about Mega-structures arises in the course of an expository preaching ministry, at those points when the word of God is being applied to our present cultural circumstances, and never otherwise. The sermons, though they are full of relevant applications, never once mention the preacher, nor his wife and children, nor his home-life, nor which team he supports. The preacher’s tie is always neatly tied. No designer stubble. He knows all his listeners by name and they are regularly visited by the eldership. Ever so ‘umble.

A period of silence may be called for, indicative of the commitment that we are all making to personal restraint, as well as to a certain fatalism

There’s a last thing. We may not know much about the private life of, say Thomas Goodwin, a good thing, but we do know quite a bit about the private life of Paul, of Augustine and Bunyan, and Spurgeon, among others who regularly wrote quite a bit about themselves. Is that a bad thing? And was the Metropolitan Tabernacle not a Mega Church? Westminster Chapel in its hey-day? To whom were Spurgeon or Lloyd-Jones or – going back even further – George Whitfield - accountable?  Maybe  there's a niche in the market for the preparation of a  Michelin Guide to Mega church-dom? A vacation guide on which crowds it is OK to spend Sundays with, and which not?

Or a guide to reading? Examples of wholesome autobiography and worthless or dangerous-to-read specimens?  And instead of dismissing Mega-churches, to offer a distinction between large congregations which are pukka and those which are – shall we say? - sliding. Lloyd-Jones always wore a tie, and a stiff, starched collar, and silk socks. And was evidently something of a control freak. Spurgeon had a full beard, smoked tobacco, and lived like a prince. Were they ‘accountable’? (I can hardly believe I am asking this, but then I did not start this particular ball rolling.)