Thinking Outside the Box? 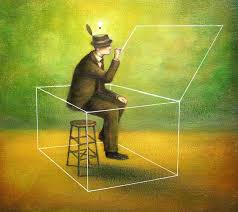 A few times ago I made the point that by their very nature confessional documents, standards for the regulation of a public body, are compromises. They are in that sense political documents. Within a common subscription to a form of words there may be wide variants still in the minds of the subscribers, questions and ways of thinking, matters of substance as of style. The supporters of a creed of confession are of course free to think and write adjacently to and in amplification of their endorsement of a position that they take a creedal statement to mean, that is, to imply, and to state what  in their view that statement means. Confessional subscription does not stifle or snuff out public comment, though it may be said to discipline such chatter.

Recently I came across two examples  in The Calvinist  International. One from a short document by Mark Jones, the other from William Perkins, posted by Simon Kennedy. These nicely illustrate this, and so I reproduce them here. (Exact links not provided. The interested reader is invited the browse this excellent blog for themselves.)

Each person subscribes to the Nicene Trinitarian formulation.  Among other things Mark Jones provides some doctrinal formulations which are in the nature of part of that formulation, in his eyes providing a gloss on it. Among them are the following.

10. The generation of the Son is both eternal and perpetual (aeterna et perpetua).  By virtue of the fact that the Son’s generation is hyperphysical (beyond physical), the Reformed orthodox could argue against the Socinians that eternal generation is not a movement from nonbeing (non esse) into existence (esse), but rather the consequence of an unchanging activity in the divine essence. Again, this is necessary.

11. The Father communicates the whole Godhead to the Son, ‘for Essentiae Communicatio facit omnia communia; the Godhead being Communicated by the Father, all things of the Godhead…only the distinction of the Persons excepted” (Goodwin). The classic Reformed position on the eternal generation of the Son includes the communication of the divine essence from the Father to the Son.  There is no generation of a new essence.  Hence, the Son’s deity, being communicated from the Father, is not derived from another essence, but is identical to the Father’s essence and therefore the Son is divine a se.  On this point, the majority position differs from Calvin’s. We may argue that although the Son is from the Father, he may still be called “God-of-himself,” that is, “not with respect to his person, but essence; not relatively as Son (for thus he is from the Father), but absolutely as God inasmuch as he has the divine essence existing from itself and not divided or produced from another essence (but not as having that essence from himself).  So the Son is God from himself although not the Son from himself” (Turretin). Turretin is making the distinction between aseitas personalis, a trinitarian heresy, and aseitas essentialis.

Some of what this asserts is the following:

1. That the essence of the Son is communicated from the Father, yet may be called ‘God of himself’. This is in accord with the ‘classic’ position, and as Mark says, differs from Calvin, who seems content with the divine essence of the Son existing ab initio, in an 'ordering' of the Persons. without the provision of an eternal ‘narrative’.

2. Communication is the activity of the Father, and thus appears to be distinct from generation. The Son is God from himself even though his divine essence is a divine communication from the Father’s divine essence, and identical to it. Bear in mind that all these relations are timelessly eternal, without duration, beginning or end.

3. We might ask at this point, why insist on the communicated character of the deity of the Son? What truth is it preserving?

4. What is the difference between begetting and communicating?

4. The begottenness of the Son is the consequence of the unchanging activity in the divine essence, (as is true of all the intertrinitarian relations). (Is ‘divine essence’, an abstraction, the correct phrase? Do abstractions act?

5. If it’s the case that ‘The classic Reformed position on the eternal generation of the Son includes the communication of the divine essence from the Father to the Son,’ is that substantially different from the original meaning to the Nicene Creed? Is it possible to know the answer to this question?

The second extract is from William Perkins.

The Son is the second person, begotten of the Father from all eternity. Although the Son is begotten of his Father, yet he is of and by himself very God, for he must be considered either according to his essence, or according to his filiation or sonship. In regard of his essence, he is autotheos, that is of and by himself very God, for the deity which is common to all persons is not begotten. But as he is a person and the Son of the Father, not of himself, but from another, for he is the eternal Son of his Father and thus he is truly said to be very God of very God. For this cause he is said to be sent from the Father. This sending taketh not away the equality of essence and power, but declareth the order of persons. For this cause also he is the word of the Father; not a vanishing, but essential word, because as a word is, as it were, begotten of the mind, so is the Son begotten of the Father; and also because he bringeth glad tidings from the bosom of his Father.

2. In contrast, his person is ‘from another’. But no suggestion that his essence is also from another. What are the implications of this asymmetry.

4. He connects the immanent trinity and the economic trinity, the Trinity as it is itself, and as it 'organised' in redemption. The good tidings that he brings are the good tidings also brought by the angel at the birth of the God-man, Jesus Christ. Perkins’s emphasis at this point is on the Son as the sent word of the Father. So his begottenness ‘fits’ with the Son’s being the divine logos and his Messiahship.

And  of both extracts, and of such extracts generally  we may ask

1. What is actually going on in these paragraphs cited? Are the authors attempting to explain the Trinity? How do they know what to say? Is this speculation? What are the grounds for what they say?  Are there biblical grounds?

2. Perhaps they are not so much explaining as  safeguarding. Safeguarding what? The mystery of the Trinity?  Is not that mystery better safeguarded by keeping quiet? If Paul was content with apophatic exclamations, as in Rom 11.33f. for example,   ought not  Christian theologians to be similarly content?

2. Is it not strange that a commitment to the mystery of the Trinity leads to the uttering of so many words? Has Scripture been left behind? Has practical religion been left behind? What would the application of any of this be to a congregation?

These are not intended to be rhetorical or complacent questions. I admire such as Mark Jones and William Perkins. But I think sometimes that we need to call the auditors in. But who are the auditors?