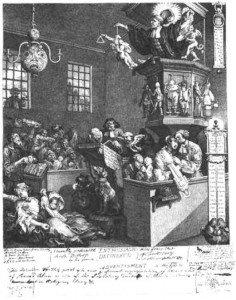 I see that reflection on affections and emotions is bubbling up again  The people that I’ve noticed discussing the matter are both well-known Edwards scholars, and this suggests that what they have in mind in attempting to persuade us that affections are to be preferred to the emotions (not only in religion, but generally, it seems) is the promotion of the Edwardsean idea of religious affections as in some sense better than religious emotions.  For example, affections are said to be stronger or deeper than emotions. They are said to be long lasting, deep, consistent with beliefs, always result in action, and the always involve the mind, will, feelings.

Let’s test this. I have an affectionate attachment to a wrist-watch that I sometimes wear. It was my father’s, one of the few things of his that I now have. The reasons I have this attachment is obvious. Among other things  I am mildly affectionate towards this time-piece, less so than to family and friends, to characteristics of the English character, to locations in the countryside, and so on. But whether or not it will be long-lasting depends crucially upon what happens to the watch. If I lose it, or it finds its way under the wheel of a bus, then my affection for it will also get flattened. And also what could in theory happen to my memory of my father would affect it. Each of these possibilities is not under my control.

I suppose to say that affections are stronger or deeper than emotions means that any affection is deeper than any emotion. But the fear that my house will flood again, which is an emotion, I take it,  must surely be deeper than the affection I have for my battered Seiko. And so on. Is it not also obvious that both affections and emotions are capable of having degrees of intensity? And we must not forget Hume's 'calm passions', such as sympathy.

In my view it’s a lost cause to try to lay out distinctives in this way. In any case, some have been missed. It is possible to have strong emotions for impersonal states and events, but affections are usually personal or have a personal reference, as with the watch. But people may also have affectionate relations to cats and dogs and budgerigars. In view of such difficulties, the best plan is trying to regiment this area is to propose a definition and commend it by working it out in the case of particular examples. But it is pretty tricky even then, for the definition may have a particular kind of example in view. So with the idea that affects are invariably intense. The Shorter Oxford Dictionary does not help much, defining an affection as a favourable disposition or inclination and (Edwardseans note) giving examples from the 18th century as  ‘An emotion of the mind, passion, lust as opposed to reason’, ‘a good disposition towards’. Most important is the fact that both affections and emotions have intentional objects which affect their character and duration. An affection for a person is different from an affection for a place, and the fear of flooding is different than the fear of inflation.

As for Edwards himself, his procedure in the opening pages of his Religious Affections is to define good religious affections on the basis of one text, I Peter 1.8, ‘Whom having not seen, ye love: in whom, though now ye see him not, yet believing, ye rejoice with joy unspeakable, and full of glory’ and to take from it the doctrine that ‘True Religion, in great part, consists in holy affections’.

Suppose that this is a reasonable inference. It is clear, nonetheless, from what he tells his readers about the state of the souls of those to whom Peter was writing what Edwards has in mind. Take what he has to say about the nature of Peter’s first readers’ joy: ‘Unspeakable in the kind of it, very different from worldly joys, and carnal delights; of a vastly more pure, sublime and heavenly nature, being something supernatural, and truly divine, and so ineffably excellent; the sublimity, and exquisite sweetness, of which there were no words to set forth’. ‘In rejoicing in this joy their minds were filled, as it were, with a glorious brightness, and their natures exalted and perfected….it filled their minds with the light of God’s glory, and made ‘em themselves to shine with some communication of that glory’. (95)

This approach to Scripture seems rather partial. As I have mentioned on Helm’s Deep before Edwards draws no evidence about what true religion consists from the lists of virtues found in the New Testament, for example, called the fruit of the Spirit. And the verse from 1Peter as glossed by Edwards is a perfect fit for the thesis that follows in the body of the book. Indeed Edwards’ comments on the verse summarise that thesis.

We know from reading the Religious Affections that the work is structured around the claim that a series of human states are neither signs that a person is gracious nor a sign that a person is gracious. The signs of graciousness in Edwards’ views are that the person exhibits 1 Peter 1.8 affections as he understands these, whatever other state he may be in. It is possible to have a series of states, any of those which are neither here nor there, and still to have 1 Peter 1.8 affection.

This line of argument favours the intense and the public, and the link with the permissibility of physical manifestations of various kinds lead us to Edwards' wife, Sarah. This reinforces the conviction that the Religious Affections is above all a political manifesto in the midst of the confusions and controversies of the revivals, not condemning the excesses, but allowing them to be linked with Edwards' analysis of true religion in the opening pages of the book and elaborated in Part II  Shewing What Are No Certain Signs That Religious Affections Are Truly Gracious, or That They Are Not.

This centre ground, between the extremes of the likes of James Davenport on the one hand, and of Charles Chauncey on the other, was part of an endeavour on the part of Edwards to retain influence in the revivals while not abandoning his Puritanism. This mid-way became the heart of the evangelicalism of the 18th century ad subsequently. True religion was transformed from being the public profession of the faith in terms of adherence to the word and sacraments and a concern for  the interior life of the soul, to a particular public style of expressing one's religion.
Posted by Paul Helm at 3:40 PM