A Small Helping of Negative Theology 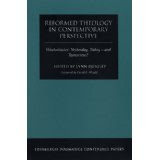 Plantinga’s proposal (‘Plantinga’s Point’) is  that it should not be surprising that we cannot understand how God knows what he knows. This commits him (and us) to accepting some negative language about God - saying what is not true of God, as well as what is true of him - and so  it may be worth exploring this matter a little further. Suppose we think about this question: When is negative theology justified and what is its role? To try to form answers to these questions we shall look at parts of a Conciliar Statement, and of a Reformed Confession

Consider these words extracted from the Definition of Chalcedon. (451)

[We also teach] that we apprehend this one and only Christ - Son, Lord, only-begotten - in two natures [and we do this] without confusing the two natures, without transmuting one nature into the other, without dividing them into two separate categories, without contrasting them according to area or function. (The wording is taken from Creeds of the Churches, ed.John H Leith. (36))
The two natures of the one Christ are
- without confusion
- without transmutation
- without division
- not divided into two separate categories
- not to be contrasted according to area or function
What lies behind this negativity? And what is its role? The words in italics are negative conjunctions equivalent two ‘and these two are not.....’. The Definition here states that the Son has two natures, and that he has these in such a way that they are not confused. That is, he has them without the two natures being mixed together, or without either or both being changed into something else. These two natures are the divine nature which he has as the Logos, and the other is human nature, with which the Logos unites in incarnation. And necessarily - so it is reasonably assumed - the divine and the human are distinct. So the human nature of Christ is not made into a divine nature, nor his divine nature changed into a human nature.  His divine nature does not have exclusive responsibility for certain areas, and the human nature for others. And so on.
So this part of the Definition is a venture into negative theology, saying (in this  case) what being the God-man does not imply, but not venturing into the business of theorising how the union of the divine with the human in one Person is to be understood. The intention is clearly to ward off the inclination to construe Christ’s two-naturedness in one positive way or another, a way that we can imagine, perhaps, or which we can use as the basis of a theory or explanation of the exact features of Christ’s two-naturedness. For that way (Chalcedon affirms) blurs the distinctiveness of the divine and the human.
But such negative theology is not to be confused with the negative theology of the Jewish medieval thinker Moses Maimonides, say, which so influenced Aquinas in his account of analogical language about God. For Maimonides the only legitimate statements about God are negative, informing us what God is not and what God is not like. The language of Chalcedon is gentler, it is intended to shape our thinking in a positive way. It is language which is meant to have, overall, a positive effect. What is that over there - it is clearly not a mouse, or a hairbrush, or a crumple of brown paper. What is it, then? Although we may still be in ignorance, after these negative conclusions we have a clearer idea about what it might be. The more targets that it is possible to rule out the fewer that it is possible to rule in, and the more accurate our aim will become. That is one way in which the use of negative language may be justified. In fact the position is more promising than this, as we shall see shortly.
A version of this Chalcedonian terminology is used in the Westminster Confession’s statements about the two natures of the Mediator,

So that the two whole, perfect, and distinct natures, the Godhead and the manhood, were inseparably joined together in one person, without conversion, composition or confusion.  (Westminster Confession of Faith Ch.VIII.II, (Leith, 203)
The Confession had also used such negative language earlier, in its statement that God ‘is without body, parts, or passions’ (Ch.II.I (Leith, 197)),  and in a rather different way in its statement regarding the divine decree (Ch III, ‘Of God’s Eternal Decree’ (Leith, 198), to which we shall now turn.
God’s Decree

God from all eternity did, by the most wise and holy counsel of his own will, freely and  unchangeably ordain whatsoever comes to pass, yet so as thereby neither is God the author of sin, nor is violence offered to the will of the creature, nor is liberty or contingency of second causes taken away, but rather established. (Leith 198, emphases added.)
The structure is to assert the decree in an unqualified way and then to append three qualifying, negative clauses to ward off the drawing of inferences which are in the eyes of the Westminster divines not warranted by Scripture to anyone who adopts the Scriptural view of God’s decree.
God ordains whatsoever comes to pass

yet God is not the author of sin
nor is violence offered to the will of the creature
nor is liberty or contingency of second causes taken away
and a final, positive, perhaps rather surprising, claim
the decree establishes the liberty or contingency of second causes
Quite like Chalcedon, but not  the same.What the Confession’s negative clauses here  do, is to draw attention to the fact that there are other scriptural statements about God’s nature and actions that must be respected. For example, take the claim that God is not the author of sin. This affirmed the apostolic teaching given in explicit terms in passages such as

Let no one say when he is tempted, ‘I am being tempted by God’. For God cannot be tempted with evil, and he himself tempts no one. But each person is tempted when he is lured and enticed by how own desire. Then desire when it has conceived gives birth to sin, and sin when it is full grown brings forth death.(James 1.13-15)
Note the language. First, a modal statement, God cannot be tempted. Then a statement of fact about God, that he is not a tempter to evil.  And thirdly a universal statement, that everyone is tempted by his own desire. The first two warrant the Confessional statement that God is not the author of sin. He is incapable of forming an evil intention, or of an evil action. The all-decreeing God is one whose nature is holy and pure, and any inference from the decree that denies this has failed to take into account of other such revealed data. And the third together with the other two also warrants the clause that God’s decree establishes the liberty or contingency of second causes. For temptation, and being tempted, given that neither can originate with God, must originate in the operating of certain secondary causes, that is, with causes at the creaturely level.
These statements of Chalcedon and the Confession offer a limited, circumscribed via negativa. They are set in the middle of many positive theological statements, and are to be regarded as qualifications (themselves stated in literal language) indicating a certain reserve when we approach the understanding of the divine nature and operations.

Plantinga’s Point once again
Plantinga’s point is a rather different one. It d0esn't have to do with God’s character as an agent, with what he can and cannot do, for instance, but with our lack of knowledge of how God knows. Not with how we are talk of God’s knowledge, but of our knowledge of his knowledge. Plantinga applies this in a way different from what the negative knowledge of God discussed earlier warrants. In his view our ignorance allows a person  tenaciously to hold on to the claim that God’s has knowledge of the counterfactuals of freedom, (say), notwithstanding the fact that the grounding of God’s knowledge of the counterfactuals of freedom is beyond us.
Three further matters. The first is that in this case the object for which God’s knowledge is not understood is not a revealed datum of Scripture but a creaturely philosophical construct, the counterfactuals of creature freedom.
The second thing  is that Plantinga’s point is nevertheless sufficient to  weaken  the strength of our belief that p, or should be, since the negative language permits  belief (for all we know) in God's ability to know q, where it is not possible that both (p and q) are true. In our example it permits belief in the divine decree and human responsibility even though we cannot seen how God knows how to decree while conserving the creaturely responsibility for what is decreed.

Thirdly and most significantly, our ignorance of how God knows has a bearing on what God knows or may know. For if we do not know how God knows, how do we know what propositions God can and cannot know?
(For further discussion of the language of the Confession respecting God’s eternal decree see Paul Helm ‘Of God’s Eternal Decree’ in Reformed Theology in Contemporary Perspective, ed. Lynn Quigley, (Edinburgh, Rutherford House, 2006))
Posted by Paul Helm at 6:08 AM